A marathon stretch in the park

A marathon stretch in the park 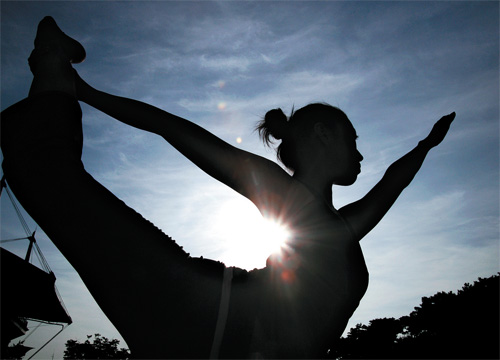 A participant strikes a pose during the Forrest Yoga session. By Jeong Chi-ho

On an unusually hot Sunday, a group of yoga enthusiasts gathered for a yoga marathon.

At a plaza facing the north gate of the Seoul World Cup Stadium, Mapo District, the participants battled heat and fatigue as they stretched, bent and curled their bodies into seemingly impossible positions.

And they did it all day. It was, after all, a Yoga Marathon, the first one ever to take place in Korea.

From 6 a.m. to 8 p.m, close to 200 people went through their asanas, or positions, with a mellow new age soundtrack streaming from the speakers. They sat, stood, crouched, twisted, reached, stooped and lay on evenly placed rows of different colored mats.

Curious passersby took snapshots with their mobile phones and probably wondered who these people were and what they were doing on such a sultry day. 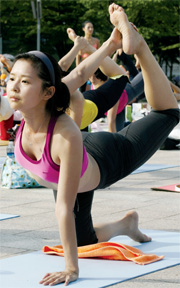 More than two-thirds of the yoga marathon people were yoga instructors from fitness centers around the country, and the rest were students, according to the organizers of the marathon, World Gym Fitness Center and Nadia Yoga College.

The idea for the marathon was inspired by the yoga marathons that started in Times Square, New York City, according to Erica Ji of Nadia Yoga College.

During the day, participants are allowed a break of approximately 10 minutes after each session and get a 90-minute lunch break.

The purpose of the event is to educate the current pool of yoga instructors and promote four of the domestically popular yoga forms to a wider audience, the organizers said.

It was certainly an early start but at 6 a.m. the weather was cooler as the participants gathered. The event was divided into a morning segment for beginners and an afternoon one for intermediate and advanced practitioners.

For those who are not familiar, all four forms use hatha yoga, which focuses on stretching and breathing, as a base. Jivamukti yoga, roughly meaning liberation, is one of the nine internationally recognized styles of hatha yoga.

Power yoga is a combination of traditional and calming effects of yoga and the power of aerobics - like training.

Magic Pond yoga focuses more on the traditional yoga forms by teaching hatha yoga styles and then Raja yoga styles, where the focus in on meditation.

Forrest yoga is a form developed by Ana Forrest which focuses on breath, strength, integrity and spirit. The meditative form focuses on controlled breathing in attempting poses and does not require as much strength or flexibility.

The organizers said over 50 participants put themselves though the entire eight courses over the day.

Nadia Lee, president of Nadia Yoga College, boasted of the quality of the yoga instructors on hand.

“Yoga in Korea has progressed to such a level over the years that there are now many serious yoga followers, but there is still a shortage of top flight instructors,” Lee said.

Leading yoga instructors such as Nadia Lee and Ron Katwijk, the founder of Magic Pond Yoga School in Itaewon and an International Yoga Federation member, said yoga started to boom in Korea about five years ago.

But back then, the quality of instruction was poor, according to Katwijk, one of the four master yoga instructors at the marathon.

“Many instructors taught classes after receiving just a three-month instructor certificate from a domestic school,” he said.

Hongik Yoga Institute was the only notable yoga school in Korea when Katwijk arrived in Korea from the Netherlands 12 years ago, he said.

The situation was akin to a yellow belt in a martial art trying to teach the fundamentals to a class of beginners, he said.

However, this problem is not limited to Korea.

“I believe the lack of quality instructors is the same in America and many of the other places,” he said, adding that the quality of instructors in Korea had noticeably improved over the years.

The yoga marathon was a reflection of the current state of yoga in Korea.

What was once considered one of the hottest forms of exercises around has leveled off to include a smaller group of people serious about the practice.

The crowd interested in taking up yoga has changed, from the merely curious to people with a specific target or a goal in mind, Ji added.

“Whether it’s to lose weight, fix posture or increase flexibility, we instruct a wide range of people. We hold classes at various corporations twice a week and have also trained the national wrestling team for the past six months. Avid golfers tell us of the improvement in their game after taking up yoga,” Ji said.

One such case is Lee Ji-soo, a 25-year-old professional mountain bike cyclist and a yoga practitioner for the past two years.

“I initially thought yoga was for women but after a back injury that seriously hampered my performance, I began to look for ways to increase my flexibility and strengthen my back,” Lee said.

Lee plans to compete in the Tour de Korea and several mountain bike competitions next year. He said his increased range of mobility has helped him avoid injury. This is quite an accomplishment for the athlete who was exempt from mandatory military duties due to a slipped disc.

Others from the marathon were quick to emphasize the spiritual aspect of yoga.

“While yoga in Korea mainly focused on the exercise aspect in the past, it is changing to include more spiritual and mental aspects,” said Andrew Fraser, a 42-year-old Canadian who works part-time as a yoga instructor at Katwijk’s school.

Fraser has been in Korea for over five years and has practiced yoga at seven different schools in Korea. He is planning a trip to India this year to further his knowledge and train.

For instructors like Lee Hyeon-min, a 32-year-old from Busan, making a living from yoga was not just a commercial enterprise.

“I don’t teach yoga merely for money. I do it for the love of yoga,” she said.

Lee, who had signed up for the full-day course peered from the towel wrapped around her head to block the sunlight said she was extremely fatigued and a bit sore but feeling good about the remaining segment.

When asked if she’ll participate in next year’s event, the visibly fatigued Lee gave a resounding yes.

The organizers claimed the first yoga marathon in Korea was a mild success considering some of the obstacles during the preparation stages. But they said 300 participants had been their target.

“Such interest in an inaugural event means we can expect a sizable increase in the number of participants for 2009 if we promote the event better,” said Ji.

“We basically had about a month to promote this event, which wasn’t enough time,” said Ray Yoon, the vice president of World Gym Fitness Center.

“With a stronger network and a more diverse program, we hope to host an improved yoga marathon next year with about 10 times the number of participants. We hope to contribute to the increase in popularity of yoga through these marathons,” he said.

Kang Hyo-jeong, the manager of marketing and PR at World Gym, said the plan has been to use Seoul Plaza, in front of City Hall, but the candlelight vigils and other protests put a hamper on those plans.

“Other locales we considered were Marronier Park [near Daehangno] and Hangang Park [Han River Park]. We want to find a suitable location that brings more publicity to the event next year,” said Kang.

Even though fewer than expected joined the marathon, Kang pointed out that 25 percent of the 6,000 members of World Gym take yoga, signalling strong interest.

Although no longer a fad, it looks as though yoga has roots in Korea that could stretch further.