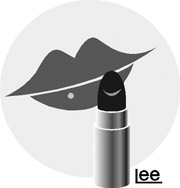 Lipstick’s origin dates back to 5,000 years ago. Around 3,000 B.C., ancient Mesopotamians ground semiprecious stones and applied them to their lips and eyelids. Lipstick was used in the ancient Indus civilization, as well. Cleopatra used red ink abstracted from beetles and ants to color her lips.

It was in Britain in the 16th century that lipstick became widespread. Elizabeth I’s white face and red lips set a new standard for beauty. In the 20th century, the cosmetics industry boomed thanks to Hollywood movies. In the films from major studios in Hollywood, white beauties with blonde hair and red lips appeared as goddesses and they became the standard of beauty and make-up.

Lipstick is a symbol of mature femininity. Sometimes it means kisses or sexual love. A little girl’s desire to act like a grown-up is portrayed by putting on her mom’s lipstick in secret. The lipstick which is used by male actors, especially when they perform on stage, is called “manstick.” A lipstick lesbian refers to a feminine homosexual or bisexual woman. The phrase “lipstick on his collar” is a euphemism for a husband who is having an affair.

“Lipstick Jungle” a best seller by Candace Bushnell, the author of “Sex and the City,” portrays the feuding and success of career women. The lipstick effect is a tendency for consumers to purchase small items like lipstick that can comfort them for a relatively low price during economic slumps.

A lipstick debate is going on in political circles in the United States. Barack Obama, the Democratic presidential candidate, made a “lipstick on a pig” comment about the Republican ticket’s assertion that they would cause “change,” sparking controversy.

Obama made the comment after Sarah Palin described herself as an ordinary hockey mom and asked, “You know the difference between a hockey mom and a pit bull? Lipstick.” Obama immediately tried to calm the controversy but it seems hard to allay middle-aged white women voters who are showing a cold response.