Am I good enough?

Am I good enough? 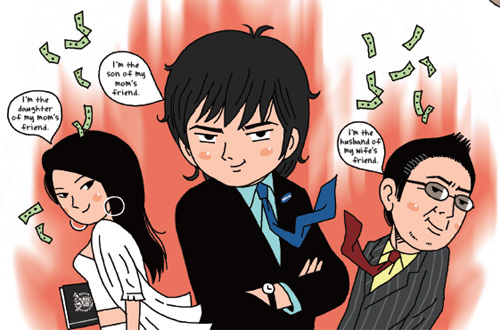 But for some, Park is more than just a national sports hero. He represents a new phenomenon that’s sweeping the nation: eomchina, which loosely translates as “my mom’s friend’s son.”

This innocuous term refers to people who are almost unbelievably, and thus repulsively, just good at everything - they have good looks, a good personality; they’re talented, get good grades and land good jobs.

The idea behind the term is that parents always seem to be going on about how wonderful their friends’ kids are, always comparing their offspring with those of their neighbors, colleagues, and school friends.

Endowed with their abundant goodness, eomchina are setting new standards for success in Korea, to the frustration of those who can only keep scrambling to keep up with the Kims.

According to experts, this has created a social syndrome, thanks to Koreans’ notorious penchant for valuing the group rather than the individual.

“Many Koreans define themselves by how society sees and judges them, and that is what has created the eomchina,” explained Hwang Sang-min, a psychology professor at Yonsei University, Seoul.

When people measure themselves against others, their flaws look worse than they actually are, while others’ assets look far better than in reality. These comparisons can lead to stress and self-depreciation, Hwang said. 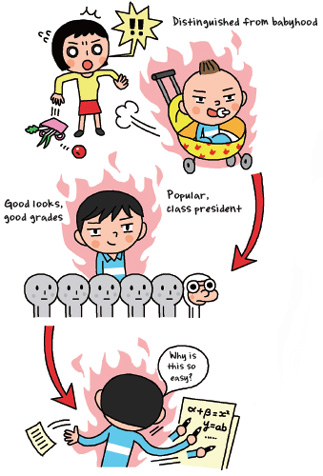 For people in their 20s just starting out in the workplace, the syndrome reflects economic and social divisions in society.

“Today, very few believe one can rise to wealth and power after being dirt poor. The reality is that those with money get a better education and better jobs,” said Goo Bon-hyung, a writer, lecturer and president of Goo Bon-hyung Change Management Center.

We examined the eomchina phenomenon by looking at the age factor. 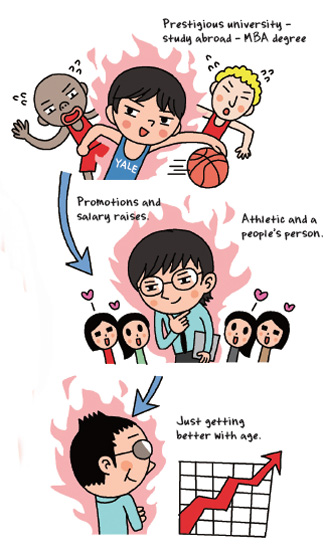 A straight-A report card is enough to turn someone into an eomchina and make one the talk of every household and the envy of friends.

But it’s a different story for people in their 20s.

Jeong, a freshman at a prestigious university in Seoul, comes from a rural area in Korea.

“Until high school, I was always at the top of my class. So I thought I was the best. But coming to this university, I realized most of my peers come from prestigious schools in wealthy Gangnam [southern Seoul]. Everyone was so sophisticated,” Jeong said.

Eomchina shine best in the hunt for work. It’s tough finding jobs these days but eomchina have a good command of foreign languages, outstanding GPAs and the right connections to pick a job of their liking.

“I think the saying ‘the rich get richer and the poor get poorer’ applies here,” said Kim Seong-jin, a job seeker. “People who lived abroad and went to good schools thanks to wealthy parents are bound to charm potential employers.”

To be an eomchina in one’s 30s, one has to have money and power. Kim, 38, graduated from a prestigious university and got a job at a conglomerate, a highly sought-after position for college graduates in Korea.

“I felt that I was an eomchina in my 20s, being at the top of the game. But now that I’m just a regular worker at a company, I feel small compared to others, especially to people who have succeeded as entrepreneurs who earn more than 100 million won ($91,633) a year,” Kim said.

Another consideration for eomchina in their 30s is marriage and their spouses.

They are constantly compared to so and so’s husband or wife, and reminded that they might not be “good enough.”

“I ran into a high school friend,” said Kim Ju-hee, 34, who got married five years ago. “She didn’t stand out at all back then, but she had plastic surgery, married a rich entrepreneur and now travels the world.”

“My co-worker married this real estate heiress,” said Choi, 36. “We all feel we’re out of his league now.”

40s: Other moms, other dads

As people enter their 40s, get married and have kids, comparisons extend to better-off peers.

“My daughter’s grades began to slip in middle school, so I told her to study harder,” said Choi, a 45-year-old government official, who felt he was falling behind other fathers.

“And she shot back: ‘Other fathers send their daughters abroad when they slack off at school. I assume you don’t have money to send me abroad.’ I worked hard all these years for my family, but at that moment they all felt in vain,” he admitted.

Other characteristics of 40-something eomchina are age-defying looks and lifestyle.

“My friend often plays golf and her complexion is just flawless. I’m depressed whenever I look at a mirror because aging has taken a toll on my face,” confessed Kim, a 40-something housewife.

“These days, you must look young and trendy to gain popularity and respect from your subordinates. That’s what made me start working out,” said Lee, a 47-year-old manager at a conglomerate.