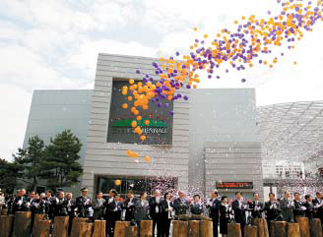 The opening of the 7th Gwangju Biennale.

GWANGJU
Standing in front of Taryn Simon’s photo documentation of an art gallery for the CIA headquarters in Virginia, United States, a question that was long taken for granted among the audiences of contemporary art grows on you: How do you look at a work of art?

The answer is also the subject of “Annual Report: A Year in Exhibitions,” the title of the 7th Gwangju Biennale, which opened last week under an unprecedented direction to eliminate having a theme for the exhibition.

The intent of the show was made clear when Okwui Enwezor, a charismatic Nigerian-born curator based in New York and the first non-Korean artistic director in the Gwangju Biennale’s history, showed up in his tidy suit during a press conference earlier this year to announce there would be no theme this year.

The reaction of the press was a mix of confusion and panic: How do you look at a work of art without a theme?

Or more importantly, how do you overcome the fear of misinterpreting?

The answer to the first question is more obvious in such works as Simon’s. You just look at the social context of the art.

“An American Index of the Hidden and Unfamiliar,” Simon’s photographic series, is a compilation of images within the United States that most people won’t know about.

These are documentations with certain anthropological significance such as a painting collection by the Fine Arts Commission of the CIA, a marijuana growing room at the National Center for Natural Products Research - the only licensed facility in the U.S. to cultivate cannabis - and the Braille edition of Playboy magazine published by the national library for the blind. 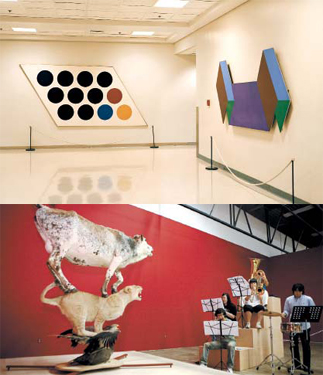 Intuition plays a major part in the way audiences respond physically to some of the works. In “Passer-by: Between Azure, Bisque and Teal,” Park Jooyeon has created musical chords based on last year’s temperature changes, sea level pressures and wind migration in Istanbul where the artist did her residency.

The curious sound of melodica accompanies snippets of images that the artist had collected from her journeys, leading the viewer into an expansive state of bodily transposition.

But for art insiders, Gwangju, which is arguably Asia’s largest biennale, went beyond a simple display of contemporary art this year.

Instead, it demanded a broader understanding about the economy of a contemporary art biennale today.

“In a way, the idea of a biennale without a theme poses a radical vision, suggesting that it doesn’t really matter how you look at art,” says art critic Ban Ejung. “It presents a practical vision of a biennale, because the director has admitted through this show that contemporary art has come to a point where it’s meaningless for curators to bind the artists’ works under a narrow theme, especially when so many biennales around the world have to compete to secure a limited number of ‘certified’ artists. To have that confession coming from art curators of Enwezor’s stature leads us to question the whole existence of an art biennale.” 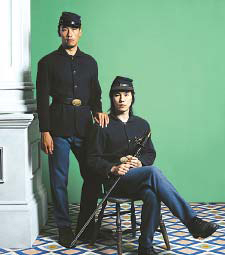 The show is divided into three segments. The first, “On the Road,” is an annual report on notable exhibitions that took place around the world between 2007 and 2008. In the second part, curators from Southeast Asia, Korea, North Africa and the United States were each asked to address historical questions from their own regions. In the last section, artists produced independent projects.

It’s apparent that the absence of themes in this biennale has led the organizers to focus on each work as an individual show without being bound by a curatorial subject.

For one thing, the presentation of the artworks has sharpened. Critics and curators from abroad raved about the show’s display, saying it is one of the best installed exhibitions that they have seen in years.

The presentation, though, largely came down to the technical fixes and artful divisions of the exhibition space.

The concrete floor in the main biennale hall underwent a month-long construction - a 100 million won ($90,200) project according to the biennale’s publicity people - to scrape off the cracks and lumps of paint. Partitions and wall colors have been carefully rendered to create layers of meaning and maintain the visual intensity of the space. 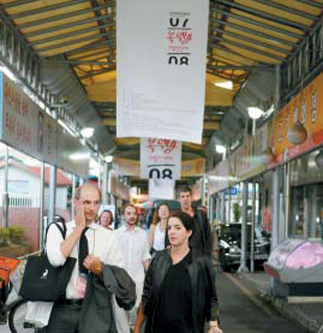 Visitors at the Daein Traditional Market.

On the long black walls in David Adjaye’s “African Cities, 2007,” the artist explores urban housing in African capitals through a series of photographs. The tactility in Hans Haacke’s “Wide White Flow,” the white fabric fluttering in the breeze created by electric fans, is fueled by the vastness of the space.

At the Daein Traditional Market, artists have pushed themselves beyond to play with the existing space.

Gu Hun-ju created an amusing drawing of Jang Mi-ran, who won the women’s gold in the 75 kilogram+ weightlifting category at the Beijing Olympics, holding up a shop’s metal shutter.

Meanwhile, three Korean artists have taken up rooms in a tiny old house where they have to climb a steep ladder to reach their studios.

But technical and spatial elements aside, the biennale organizers agree this year’s Gwangju, at last, dismantled a lot of the biennale’s age-old bureaucracy and treated the event as a sophisticated occasion that meets international standards.

Everyone involved knew exactly what they were supposed to be doing, staff explained. Formal extravagances were trimmed back, such as hands-on programs for children and invitations to pop singers, and a time-consuming recitation of high-ranking city officials at openings.

Instead, money went on covering the cost of publicity. This year Gwangju held four major presentations overseas including Art Basel in Switzerland and Manifesta in Italy, and the foreign press attended Gwangju’s opening.

“Whether you like it or not, a biennale should function as a vertex of contemporary art discourse,” says Kim Jang-un, the curator of Gwangju. “Unfortunately in Korea it is often seen as a local festival. In a way, with the authority of an outside director, Gwangju for the first time was forced to adopt a Western system for an art biennale, which the Korean directors in the previous shows had also known, but never dared pushing for. That was the most meaningful transition of this year’s show.”

The appointment of a foreign art director, though, was not the biennale’s original plan. After all, Gwangju has become a democratic sanctuary for most Koreans after its uprising in 1980 that left thousands of citizens dead and wounded.

The Gwangju Biennale started in 1995 with an initial effort to commemorate the city’s democratic spirit though art.

Minjung art, or people’s art, took up a significant portion of the artists’ works during the earlier stages of the biennale. The appointment of a Korean art director seemed inevitable.

That tradition naturally came to an end, however, when Shin Jeong-ah, the curator named as the co-director of Gwangju last year along with Enwezor, made a huge media splash by faking her academic record. The scandal forced 28 board members of Gwangju to resign.

And yet, the show, despite a lack of propaganda art or a Korean art director, perfectly encompasses the spirit of Gwangju, which is deeply political but also contemplative.

The best example is the biennale’s use of Uijae Museum of Korean Art, a private museum dedicated to Huh Baik-ryun, a painter from the region, known for his critical engagement with the local farmer’s movement.

His works juxtapose artfully with the paintings of Byron Kim, a Korean-American artist who presented two large canvases painted in celadon green extracted from a traditional tea cup dating back to the Goryeo Dynasty. But in the end, a better way to appreciate this year’s Gwangju is to simply look at the show as you’ve been told: After all, it’s what you get out of the work that the biennale’s themeless show tries to pursue.

Annual Report: A Year in Exhibitions