Nobody’s perfect, just try to be yourself

Nobody’s perfect, just try to be yourself 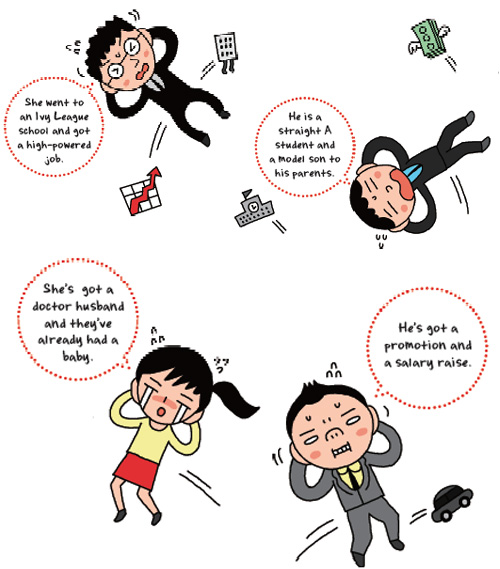 Not everyone has a strong enough ego to brush off comparisons with eomchina. Most people feel a spot of envy, but some end up feeling completely inferior.

We looked at how we can fight the Eomchina Syndrome. Psychiatrists Mun Yo-han and Lee Na-mi contributed reporting for this article. 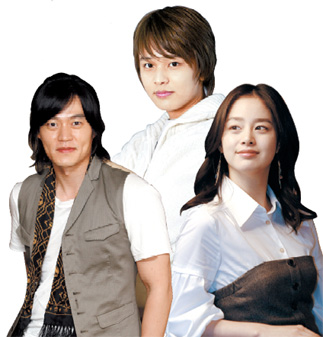 Feeling not good enough is only natural, experts say. As people grow older, they start to take an objective look at themselves and the world around them. In doing so, they process what they see as their weaknesses and strengths compared to others. The problem arises when they think they only see weaknesses.

Even the seemingly perfect eomchina don’t always feel great about themselves. Kim Jeong-hun, a singer-actor, is an eomchina celebrity. He went to dental college at Seoul National University, a prestigious university, although he dropped out.

“My brother and my cousins have been my eomchina,” said Kim. “They’ve been called prodigies from early on, and I felt so small around them.”

In fact, according to experts, the majority of people who suffer from a sense of inferiority and seek professional help are those with obvious charms, capabilities and a significant “wow factor.”

A high school student who’s athletic and popular may think he’s not good enough; a manager at a big-name company may believe that he lacks leadership qualities.


Don’t try to fight it

There is no need to run from eomchina. They are around us throughout life.

In fact, such fruitless attempts can cause unnecessary stress as it’s a human instinct to constantly compare ourselves with others, experts advise. Instead, come up with clear definitions of your strengths and weaknesses, what you’re good at and what you’re not so good at.

Be specific. For instance, a man of short height shouldn’t just say “I’m short. No one likes me.” Instead, he should say, “I’m 162 centimeters [5-foot-3] tall. I’m below average height.”

Of course, you should work on things that can be changed. Instead of just lamenting, “I don’t have friends,” you should train yourself to ponder, “What should I do to make friends?”

When your co-worker is perfect, and is praised by your boss, admit it, you hate him or her.

But such negativity can poison you. When you feel that way, reward yourself by saying “You’ve come this far without being perfect. Good job!”

You can even try praising that co-worker like others do. That way, you have more rewards to give yourself for being the big, generous person.

The Eomchina Syndrome stems from a collectivism that encourages people to be just like others.

Learning about fine wine and arts just because others are doing so is a good example. Instead, why not venture into something that others don’t do, and really live the way you like?