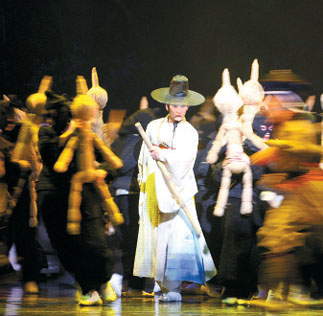 “Scent of Spring” by the National Dance Company of Korea. Provided by the organizer

Too much choice can only be a good thing, which is why over the next few weeks, the National Theater of Korea is offering audiences a selection of performing arts, from traditional plays to modern dance.

“The festival brings national performances from different cultures that represent the international arts scene,” said Oh Ji-won from the National Theater of Korea. “At the same time, it promotes Korean performances abroad.”

Russia’s State Academic Maly Theater will be performing one of Anton Chekhov’s major plays, “Three Sisters,” directed by Yuri Solomin. The story, is about the decline of the privileged classes at the end of the 19th century. The play runs from Sept. 25 to 27.

“Raise the Red Lantern,” performed by the National Ballet of China and directed by filmmaker Zhang Yimou, is another highlight, fusing Oriental and modern elements. It will be staged from Oct. 29 to 30 as the festival’s closing performance.

“The festival should charm many audiences with different theatrical performances, like last year,” Oh said.