‘Stingy’ image embarrasses Korea into giving more to the poor

‘Stingy’ image embarrasses Korea into giving more to the poor 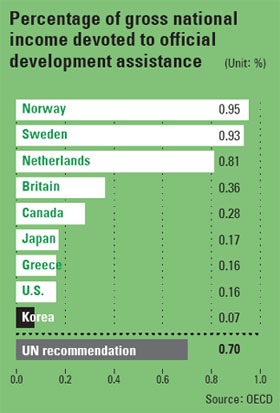 Korea’s official development assistance (ODA), the loans and grant aid for developing countries, has been “pitifully and embarrassingly meager,” United Nations Secretary General Ban Ki-moon said during his visit to Seoul in July.

Now Seoul is scrambling to shake off its stingy image and remember that it was a major beneficiary of international aid in the wake of the Korean War.

The country’s total official development assistance in 2007 amounted to $670 million, 0.07 percent of the country’s gross national income (GNI)and far short of the UN-recommended 0.7 percent. The number is also nowhere near the average of 0.28 percent for the countries in the Organization for Economic Cooperation and Development.

Japan, one of the largest contributors of international aid, manages 0.17 percent and chipped in $7.7 billion last year. Japan has steadily expanded its presence in the international effort to fight poverty, climate change, AIDS and other problems plaguing the world’s poorest countries.

Seoul, facing the intensifying glare of the international community and chided by luminaries like Ban, announced ambitious plans in August to increase its ODA-to-GNI ratio to 0.15 percent by 2012 and to 0.25 percent by 2015. Whether Korea realizes its targets remains to be seen, but it seems clear that the government wants to expand the role of the Korea International Cooperation Agency, a state-run body that handles overseas aid.

Not surprisingly, Southeast Asia has been the major target for such efforts. Indonesia and Vietnam topped the list of beneficiaries. Vietnam has attracted a massive amount of aid due to its potential as one of Asia’s fastest rising economies.

Since 1992, it has sent more than 80 volunteers every year, the largest among foreign volunteer workers in the country. Most of the aid is in the form of developmental projects.

For instance, Korea helped Vietnam lay a framework for its first telecommunication laws and built IT colleges and more than 40 elementary schools in the country’s less-industrialized middle region.

Meanwhile, as Seoul gradually beefed up its international contributions, the number of its overseas volunteers has expanded from 44 in 1990 to 964 as of last year.