The human face of overseas aid

The human face of overseas aid 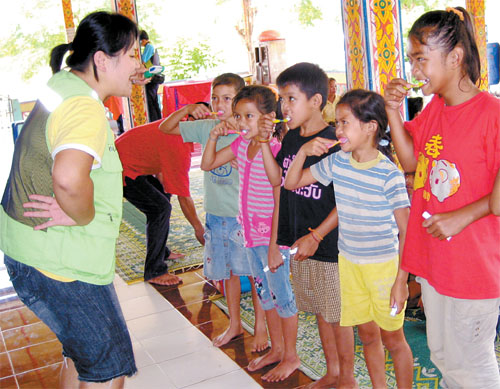 Koica volunteer Kang Sun-mi shows children how to brush their teeth at Jang village, near Vientiane, in August. She teaches childhood education at Vientiane’s education office.

Most days Thoulakhom Jang Temple is usually a quiet place of solitude for orange-robed monks and cool shade for wandering water buffalo looking to escape the late August sunshine.

But this day the atmosphere was anything but solemn.

“How many times do you have to brush your teeth a day? Three times a day, three minutes after a meal!” said Kim Hye-rim, raising her voice to reach some 30 Lao children watching her with great intent.

“You’d think teaching dental hygiene was not that important. But here it is,” Kim later explained. 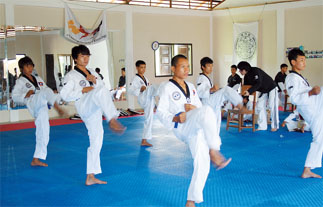 Children in Luang Prabang, Laos, practice taekwondo at a gym built by Koica earlier this year. Twenty-three children, aged 8 to 18, study the martial art with a Koica volunteer five days a week.

Against a backdrop of brightly colored murals depicting scenes from the life of the Buddha, some 100 people watched Kim demonstrate in fluent Lao the basics of oral hygiene and explain why taking anti-parasite drugs is important for getting rid of intestinal worms, an endemic problem in villages like Jang, an hour’s drive from the capital, Vientiane.

Many villagers in places like Jang spend their entire life never brushing their teeth, according to Kim, who teaches Korean language at the National University of Laos in Vientiane.

Kim was one of 12 volunteers from the Korea International Cooperation Agency working on a field trip from the capital to a remote rural community.

Every two weeks they visit villages like Jang, with a population just over 2,000, where they offer medical counseling. 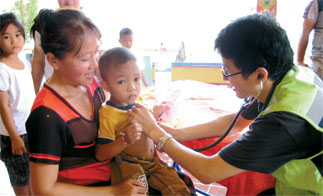 Park Byoung-won, a Korean doctor and a Koica volunteer at Mittaphap Hospital in Vientiane, treats patients in Jang village. By Jung Ha-won

Each of the 12 volunteers has a different mission in this landlocked country, bordered by Burma, China, Vietnam, Cambodia and Thailand.

Some teach kids taekwondo after school, some treat the sick and others help build water treatment plants.

Korea’s international aid programs lag behind the efforts of other developed nations, but it has pledged to boost the amount of money it commits to helping people in less well-off regions of the world. (See story below.)

Founded in 1991, Koica is a government agency charged with implementing the country’s grant aid and other overseas development assistance programs.

The volunteers spend two years mingling with locals of remote villages in far-flung countries, learning the local languages, trying to assimilate into the local culture and learning more about the rest of the world, Kim said.

Medical help is one of the volunteers’ most vital contributions. “Jang was recently hit by a flood, so now is a critical time to prevent diarrhea, skin conditions and other waterborne diseases,” said Han Sang-hoon, a 31-year-old doctor at Mittaphap Hospital in Vientiane.

Han said his volunteer work in Laos has been rewarding. Before he thought he only had two options: open his own clinic or get a job at a big hospital. He said he is now considering a job at an international aid organization.

However, volunteering in countries like Laos is not a walk in the park; many find it difficult to adjust to the challenging lifestyle. Most have to start from scratch as soon as they land and they are faced with communication problems since they rarely know the local languages when they first arrive. They also find it hard getting locals to understand why they came to such remote places and what they plan to do. 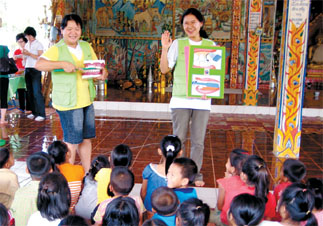 The problem is compounded by the relatively small projects that Koica is running.

Baek Mi-hwa, a Koica volunteer in Vietnam, said she went to the village of Phminh outside Hanoi in November 2006 where she wanted to help farmers run a fish farm. Through past Koica projects in Vietnam, farmers had boosted their income by fish farming, Baek explained.

A student in the Department of Aquatic Life Medicine at Pukyong National University in Korea, she thought the villagers would welcome her when she arrived, but this was not exactly the case.

“Japan had recently spent $10 million on a new hospital nearby [Phminh] and Australia had installed water supply networks through the entire prefecture,” said the 29-year-old.

“The villagers looked quite disappointed that I wasn’t there for fancy projects like building paved roads or giant hospitals,” she said.

But Baek soldiered on. For the following six months, she tried to establish relations by getting to know the villagers.

She walked several miles a day to visit different areas, taking gifts of fruit, holding an art competition for children and taking photos of village elders.

Baek said villagers were familiar with Korean TV soap operas and the Korean drinking culture. “So they loved drinking with me so much. I sometimes had to drink to oblivion while having dinner at their homes every now and then,” she said.

Baek’s efforts to reach out to the locals started to work. A dozen farming households joined the fish farm program this year, learning which freshwater fish resist disease, how to keep a pond clean and what to feed the fish.

Nguyen Van Ti, one of the villagers, said his income will likely more than double from about 400,000 dong ($24) to more than 800,000 dong, by switching from raising crops to raising one ton of the freshwater fish in his newly made fish farm.

He said he is now able to set up a college fund for his 19-year-old son.

While Korea’s overseas aid is small compared to the multimillion dollar projects that major donors like Japan or the United States offer, Korea’s more intimate, face-to-face approach is a more effective way of winning the hearts and minds of locals, according Kim Gi-youn, who works at Vietnam’s Institute of Environmental Technology.

Countries that set up multimillion dollar projects in countries like Vietnam and Laos often fail to send in personnel who know how to use the technology and who can teach people how to use it effectively.

“But our approach is more intimate. We send working-level people, meet Vietnamese technicians face-to-face and teach through our experience,” he said.

Korea went through rapid industrialization faster than most other advanced economies, so the country knows what challenges countries like Laos and Vietnam face, he said.

In addition, Korea is neither fully developed nor undeveloped, so it is in a prime position to offer up-to-date experience on the pitfalls of rapid industrialization.

“Our monetary contribution is smaller than other major donors, but we send talented people and take some of the people here to Korea for training,” said Kim.

“That way, we become friends and partners, not just donors and beneficiaries.”