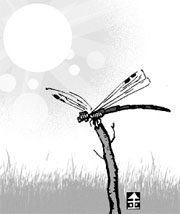 When there are less convection currents in air moving vertically, there is less dust floating up into the sky. Rain and moisture wash dust back down to Earth, also helping to clear the sky.

This is the scientific description of autumnal skies we see in the Northern Hemisphere.

By now, most of the vegetation in the fields should have changed color, and when golden hues fill the landscape we call it golden fall.

At these times people start pondering life and nature, like the axiom, “A single leaf falling is a sign of autumn coming,” meaning that we can foretell the future from just one small thing.

Fall is the season of iron among the five elements of wood, fire, earth, metal and water. Metal is cold.

In Asian society in the past, fall was the season when prisoners were executed. It was the season for finality and closure, and the time for justice in Asia.

It is also the time when cold winds blow and vegetation growing on Earth bears fruit. Therefore, bringing things inside rather than outside is more appropriate.

Fall is the season for self-examination and dwelling on internal growth. It naturally presses us for internal reflection and an end to work.

The words of famous poets also reflect such feelings.

Poet Kim Hyeon-seung’s “Autumn Prayer” reads, “In the fall, let me be alone/ my soul/ past the rocking sea/ valleys of lilies/ like a crow that has reached a dry branch.”

German poet Rainer Maria Rilke wrote in his poem, “Autumn Day”: “Bid the last fruits to be full/ press them to ripeness, and chase/the last sweetness into the heavy wine,” portraying the image of maturity that comes with autumn.

It is worrisome that fall in Korea this year does not feel like fall. The scorching heat prevalent in mid-September during the day made the Chuseok holidays that conventionally celebrate the harvest feel more like summer than fall.

Is it because the candlelight of spring and summer swept the skies over the Korean Peninsula?

Besides the weather, it is worrying that our society is forgetting the meaning of self-examination and maturity that the fall season calls us to consider.