An unlikely hero with Asian kick

An unlikely hero with Asian kick 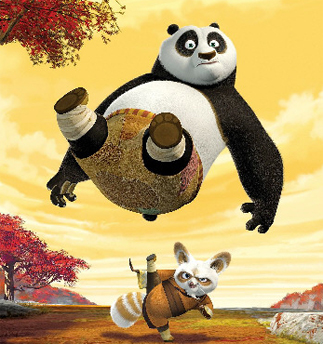 “Kung Fu Panda,” released in June this year and produced by DreamWorks, is one of those family movies for people of all ages.

A pudgy panda named Po (Jack Black) works in a noodle shop for his father, Mr. Ping (James Hong), who is a stork. Mr. Ping strongly believes his son will take over his business, but Po dreams of being a kung fu hero. One day, Po is really excited to hear that the legendary Dragon Warrior will be chosen.

The story is a familiar one, and not at all surprising. This movie, however, entertains with its own unique characters instead of being tedious. It is enjoyable watching the process a flabby, but cute, panda goes through to become a kung fu hero. The five supporting characters, Tigress, Viper, Monkey, Crane, and Mantis, demonstrate some impressive martial arts, which I wanted to see more of.

Kung Fu Panda is a family movie because of its good message delivered through the wise man, which seems a lot like Buddhism in every sense. The morals may bore some adults, although it is fine for their children.

In the movie, the line “There are no accidents” is repeated five times. The wise turtle says, “No matter what you do, that seed will grow to be a peach tree. You may wish for an apple or an orange, but you will get a peach.” This is a Buddhist philosophy which explains if there is a cause, there should be an effect. This message, widespread throughout the movie, shows that Po deserves to be the Dragon Warrior.

Po learns that he possesses superhuman powers when it comes to his obsession with food. This doesn’t make him the strongest action hero, but it does provide a couple of laughs.

Audiences can appreciate Po as an anti-hero with an Asian twist. This lovable, huggable Chinese panda spreads a Buddhist message in a pretty well-made family movie.

The DVD will be available in stores in Korea in December.