Boys better off with lowered expectations

Boys better off with lowered expectations 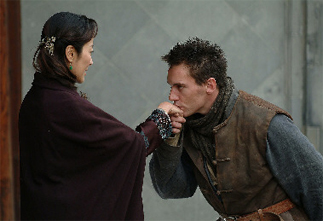 As someone whose job responsibilities include trolling around on CineSeoul for new releases, I’ve found myself depressed by the poor selection of this year’s fall films. With very few English-language releases this month, avoiding such dreck as “Bangkok Dangerous” and “Star Wars: The Clone Wars” hasn’t been easy.

Compared to such disasters, “The Children of Huang Shi,” the product of an unlikely China-Australia-Germany film alliance, grew ever so much more appealing. The biopic tells the story of George Hogg (Jonathan Rhys Meyers), a little-known British journalist who sought to infiltrate 1930s Nanjing, China to report on Japanese atrocities there.

Hogg and two colleagues decide to pose as Red Cross workers to get into the war zone. They are promptly caught, but not before Hogg witnesses mass murders and brutal violence at the hands of the Japanese. As the Japanese prepare to execute Hogg, a band of nationalist guerillas, led by Chen Hansheng (Chow Yun Fat) swoops in to his rescue.

A bit worse for the wear, Hogg ends up in the hands of Lee Pearson, an Australian nurse (Radha Mitchell, who, despite being Australian herself, speaks with a very American accent with a few British-accented syllables thrown in). Chen and Pearson decide Hogg should rest and work on his Chinese at an orphanage before returning to the war zone. And this is where he meets the “children of Huang Shi” in the film’s title.

Rhys Meyers, of “The Tudors” and “August Rush,” is charming as he works his way into the hearts of the war-scarred young boys. But as a biopic, The Children of Huang Shi doesn’t give us a full portrait of George Hogg. We just see that he’s a good person, who for some reason has ditched his ambition of spreading news of the war. It’s a simple snapshot of a man, void of motivations.

The film understandably has to cover a lot of ground: its objective is to show how Hogg goes from being repulsed by the boys to growing inspired to start a new orphanage in the Chinese mountains, far from the carnage of the war. Such a full plot means that short blips of screen time are meant to represent significant developments.

Also, Hogg must connect with so many characters that their relationships are forced to make great leaps in the briefest encounters. Hogg’s predictable romance with Pearson and his “deep” friendship with a local merchant, Mrs. Wang (Michelle Yeoh), are never fully fleshed out. One minute they’re making introductions, the next they’re exchanging kisses.

Mitchell, despite her beauty, is a real weak link in the production with her soulless delivery of lines. “These boys don’t need me, but oh yes, I do need them,” she drones in a flat monotone.

In fact, the most soulful part of the whole production is the end credits, during which Hogg’s real “adoptive children,” all grown up, speak to his true character. These interviews are more moving than the rest of the film; perhaps this should have been a documentary, not a feature film.

But at least the film has good intentions. I’m willing to bet it stands head and shoulders above this week’s competing English-language release, the miserable “Mirrors.”

The Children of Huang Shi