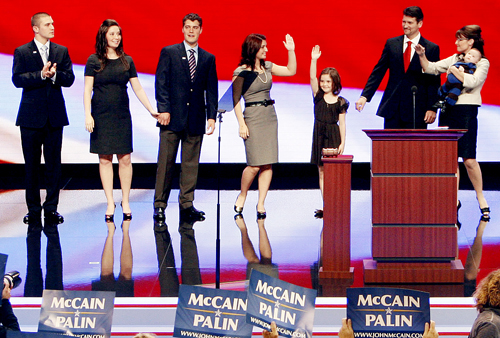 Sarah Palin is joined by her family on stage after her speech at the Republican National Convention on Sept. 3. [AP]


I read something the other day that really struck a chord: The biggest issue the United States should worry about if John McCain becomes president is the international reaction. In this globalized era, it is imperative that nations retain international respect in order to forge strong and lasting relationships that are essential to national security and economic progress.

Unfortunately, the Bush administration multiplied the list of U.S. enemies and even marginalized friends to such a degree that the international community has almost as much invested in the November election as do the American people.

I have lived abroad during the Bush administration and oftentimes have vehemently agreed with its international critics. Imagine my excitement then, about the impending end of an administration studded with ineffectual policies, unilateral actions, and warmongering. Many of my fellow Americans seem inspired as well, giving consideration to breaking racial and gender hurdles to the White House.

To defeat Obama, John McCain must convince the majority of Americans that he and the Republican Party should be given another chance.

On paper, this is a daunting task. McCain, long viewed as a moderate Republican, has spent the majority of the last eight years supporting Bush policies, both rhetorically and through his Senate votes, which have backed Bush more than 90 percent of the time.

In a 2005 interview, McCain reiterated that commitment to the Bush administration, saying, “I have agreed with President Bush far more than I have disagreed. And on the transcendent issues, the most important issues of our day, I have been totally in agreement and support of President Bush.” Only now, with his White House bid on the line, has McCain started to distance himself from Bush.

A McCain administration would simply continue Bush’s failed policies: more tax cuts for the rich, a protracted war in Iraq, and more willingness to exercise blunt force rather than diplomacy.

But even in the face of failed foreign policies and a weak economy, many Americans have decided that we need another Republican. Current national polls show McCain either neck and neck with Barack Obama or even nudging ahead. How is this possible?

Partly to blame are the U.S. media, which often veer off major issues and into trite matters such as a candidate’s attire. Also responsible is the culture of deceit in American politics; campaigns regularly manipulate public opinion with distortions. Finally, some of the blame can be aimed at the psyche of voters.

The U.S. would benefit immensely if more people expected their president to be more educated, more experienced, and more globally-minded than themselves. But a vast number of Americans still insist on voting for someone they can “relate to.” Republicans pandered to that sentiment in getting Bush elected and the McCain campaign is trying to do the same, emphasizing personality.

McCain has caught up to Obama by selecting Alaska Gov. Sarah Palin as his vice presidential running mate. The “hockey mom” immediately appealed to American mothers, but has received more acclaim for birthing five children than for any one action as governor.

McCain’s choice was bold, but it also reflects the kind of go-for-broke decision-making that he would bring to the White House. McCain is a 72-year-old skin cancer survivor, who must realistically accept the possibility that he may not finish a presidential term. His choice of Palin characterizes disregard for the consequences of his decisions.

Republicans have spent nearly eight years demonstrating that international opinion should not matter to the U.S. The Bush administration has disregarded UN decisions and recommendations by allies and taken unilateral actions.

Conflicts in Georgia, Iran, Iraq and North Korea, all of which have either arisen or escalated during the Bush administration, are indicative of the instability that arises when the U.S. with arguably the greatest global influence and the strongest military, is unwilling to work with its allies or talk with its enemies in pursuit of peace. Additionally, the economic and political costs of Bush’s war in Iraq have overstretched the ability of the U.S. to respond to crises at home and abroad.

Another Republican administration is not in the interest of global progress and stability. The international community should hope it does not become a reality.

The views expressed by the writer are her own and do not reflect those of the institute.

<1-Headline>
What the world needs now