A grand mountain gateway to Gyeongsang

A grand mountain gateway to Gyeongsang 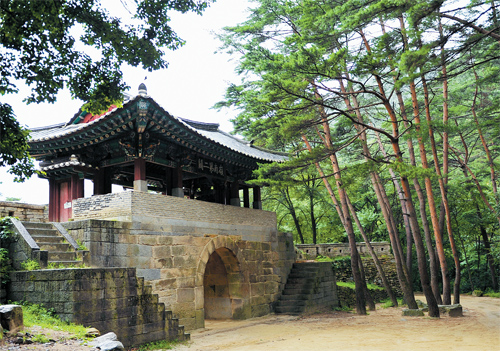 Jogokgwan Gate, the second checkpoint in the Mungyeong Saejae mountain pass, was built in 1594. [JoongAng Ilbo]

What kind of world lies beyond the Mungyeong Saejae, the mountain pass in central Korea?

During the Joseon Dynasty (1392-1910), Mungyeong Saejae was an important gateway out of the Gyeongsang Provinces to Hanyang (now Seoul). It was also the main connection between the Nakdong River in Gyeongsang and the Han River in the capital.

Crossing the Mungyeong Saejae was a rite of passage for aspiring scholars on their way to Hanyang to take the gwageo, the national civil service exams, and for governors heading in the opposite direction to take up their new regional posts. Both sets of travelers had to trek through the pass to reach their new worlds.

But the 6.5-kilometer (4-mile) mountain pass connecting the city of Mungyeong in North Gyeongsang and Goesan County in North Chungcheong was never especially friendly terrain. Saejae, meaning “bird pass,” suggests “a pass so high and steep that even birds find the crossing difficult.” 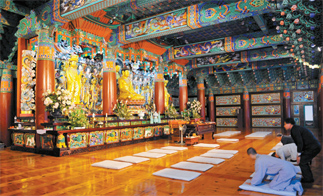 The pass was designated as one of the 100 most beautiful roads by the Ministry of Land, Transport and Maritime Affairs. It starts at Juheulgwan Gate in Mungyeong, the first of three gates along the pass. Built between the 16th and 19th centuries, the gates are all located on Mount Juheul, known as the city’s guardian mountain. Collectively, they are known as Mungyeong Gwanmun, meaning “gateways,” and were designated as Historic Site No. 147 in 1966.

As you venture under the gate, you embark on a trip back in time. Today, even the narrowest farm roads are paved with cement, but Mungyeong Saejae is still the unpaved, dirt road it has been for centuries. The late President Park Chung Hee ordered in 1976 that the road never be paved. Park had worked as a teacher in Mungyeong in his 20s and led Korea’s rapid move to industrialization in the mid-20th century.

The mountain pass is also known as “an old road where poems flow.” The roadside is dotted with stone and wooden monuments inscribed with poems by big-name scholars such as Kim Si-seup, Lee Hwang and Jeong Yak-yong. 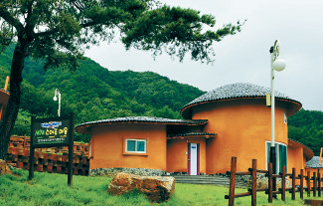 After passing though the gate, you come to a film set, a purpose-built village set up in 2000 for filming epic dramas and movies. The KBS TV drama “The Great King Sejong” is currently being shot there.

Past the film set lies Joryeongwon, a hostel that government officials used to stay in, and a tavern where travelers ate, drank and rested. The Mungyeong city government restored both of the two buildings recently.

Halfway between the Juheulgwan Gate and Jogokgwan Gate, the second checkpoint, you come across Gyoguijeong, a pavilion where the Gyeonsang governor and his successor met for the handover of the duties. The scholar Kim Jong-jik (1431-1492) named the pavilion while crossing the pass. Gyoguijeong was also restored recently by the Mungyeong government.

The pass runs through the picturesque Yongchu Valley and past Jogok Waterfall. There is a legend that the gods of heaven and earth played with fairies at the waterfall. If the sun is shining, you can see shiny pearls dancing in the 20-meter (65.6-feet) waterfall.

And then Jogokgwan Gate comes into view, against the backdrop of scenic Mount Juheul.

The pass between Jogokgwan Gate and Joryeonggwan Gate, the third and final gate, is pretty steep, winding close to the mountain side before the magnificent vista of the third gate comes into view. 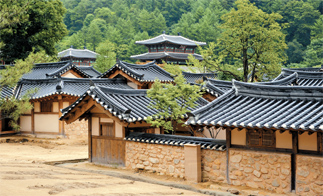 A film set for historic dramas built in 2000 [JoongAng Ilbo]

The first two gates protect against enemies from the south. Joryeonggwan Gate looks to the north.

There is an old saying that you hear three pieces of good news in Mungyeong. King Gongmin (1330-1374) of the Goryeo Dynasty (918-1392) heard the capital had been reclaimed from the rebels when he was on Mungyeong Saejae. The philosopher Lee Dal heard that Korea had been liberated from Japanese rule when he was at Jogokgwan Gate.

And the third? The beauty is in the expectation, waiting for some good news to come as you cast your eye over the green forests and breathe in the cool mountain air.

Sohn Kyung-shik is CEO and president of CJ Corp., chairman of the Korea Chamber of Commerce and Industry and head of the Korea-China Economic Council.

* Free if you don’t visit the film set.

Other tourist attractions nearby

Saejae Smurf Village: The pension house, run by the Mungyeong city government, offers a night in a cozy village with mushroom-shaped houses like in the cartoon “The Smurfs.” Call (054) 571-8085.

Mungyeong Saejae Trip: The Mungyeong city government will hold a Mungyeong Saejae tour on Sept. 27 and Oct. 11. Participants can get involved in traditional cultural activities and performances. Call (054) 555-2571 or visit www.mgmtour.com.

Hachodong Tteokgalbi: Hanwoo is one of Mungyeong’s specialties and this restaurant serves tteokgalbi, or beef patties, that lures many visitors. It is located at the entrance to Mungyeong Saejae. Call (054) 571-7977.

Mungyeong Ceramic Ware Museum: Mungyeong is known for its traditional ceramic crafts. The museum is located at the entrance of Mungyeong Saejae. Call (054) 550-6393 or visit dojagi.mungyeong.net.

Bongam Temple: The temple, Gaeun, is open to the public only on Buddha’s birthday. One of its structures was recently designated as National Treasure No. 1,574. Call (054) 571-1538.