Eco-villagers seek utopia in the green hills of Mount Jiri

Eco-villagers seek utopia in the green hills of Mount Jiri 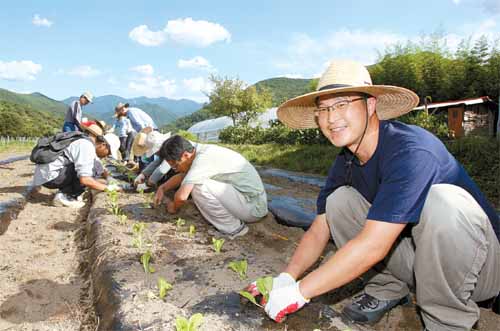 Students from the city learn how to plant Korean cabbage in a field in the township of Sannae, North Jeolla. [JoongAng Ilbo]

SANNAE, North Jeolla - Feng shui experts covet the village because it is shaped like a lotus flower, surrounded by craggy peaks and the verdant hills of Mount Jiri.

It’s located near the historic Silsang Temple, which dates back to the Unified Silla period (668-935) and it is now home to the largest number of city dwellers who have uprooted their families and gone in search of a more rural existence.

For the past 10 years, the population of Silsang Temple Village, which lies in the township of Sannae near Namwon, North Jeolla, has risen from 1,900 in 2000 to 2,100 today.

Lim Dong-seok, a 56-year-old organic farmer, is one of the 300 new arrivals. He arrived 10 years ago with his wife Ko Byeong-soon when Monk Dobeob, the head of the temple, began renting out land around the temple in 1996.

The couple now cultivates 60 to 70 different kinds of produce a year, such as potatoes, onions, garlic, zucchinis, peanuts, spinach, ginger and scallions.

The rules for cultivation here are simple: no chemicals added to the crops and no machinery used in the fields. The couple sticks religiously to traditional farming methods.

“Machines are for mass production,” Lim says. “We don’t see the difference between farming for money and city life. Using gas for machines is not good for the environment, either.”

The community at the village now has an alternative school and a cooperative for organic farming. 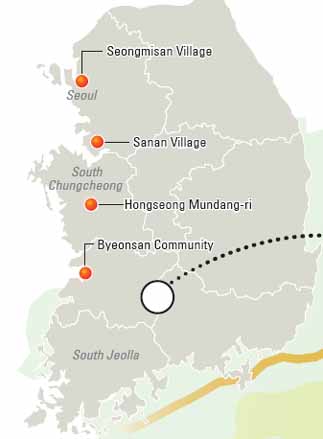 But what drives so many people to this place?

The allure of the natural surroundings is clearly a factor - who wouldn’t want to live among green trees surrounded by nature?

An article in Forbes magazine earlier this year named eight utopian communities where people are choosing to form communities and live eco-friendly lives and resisting the competition-driven values of the capitalist system.

One such utopia is The Farm in Tennessee in the U.S., where the residents want to “demonstrate low-consumption, high-fulfillment lifestyles within a caring, socially active community,” the article explains.

These are certainly reasons relevant to why people like Lim and Ko have moved to the temple village, but their new-age values are not necessarily shared by the farmers who have been toiling the land in Sannae for generations.

The intellectual values of reclaiming health, promoting an environmentally friendly lifestyle, energy-saving facilities and reducing the use of chemicals in daily life don’t always convince those that depend on the land for their livelihood.

In addition, over the years the ideals of collective living have loosened as new residents settled in and began gravitating toward more individualistic lifestyles. Musicians and writers came here to work on their artistic projects in addition to farming.

“Maybe it’s because the community only started 10 years ago,” says one resident, explaining the changes. “Many people are still busy settling in.”

But that’s not to say that eco-living has run its course in this region. “We are all becoming more aware of the global food crisis and I think this will encourage demand for more alternative communities,” says Lee Hye-gyeong, a representative of the organic farming cooperative at the temple village.

In fact, another village in Sannae, currently under construction, will require all villagers to install special energy-saving facilities such as a solar power generator.

Monk Dobeob, seeing the need to establish new lines of communications, is planning to build a 300-kilometer (186.4-mile) road through the forest.

Definitions of what constitutes an eco-village vary, but according to the Global Eco-village Network, it is a village connected through values focused on ecology, a social collective, culture and spiritual issues, and one that continues to explore a self-sustaining lifestyle.

Ansolgi was the first eco-village in Korea. In 1998, the neighborhood took root around the Gandhi School, an alternative school in Sancheong, North Gyeongsang.

Choi Se-hyun, the current representative of the village, was the first to arrive a year later when the Ansolgi villagers, wanting to develop their plans for an eco-village, put out a call for residents.

But whereas other eco-villages encourage people to participate in eco-living through education programs and tourism, Ansolgi has remained exclusive to outsiders.

Out of 50 residents and 14 households, Choi is the only farmer. Others are doctors, architects and pharmacists who commute to the city of Jinju, a 30-minute drive away.

Residents there are not allowed to install modern bathrooms and construction regulations are strictly guarded.

Residential affairs are decided through a monthly meeting of the villagers.

Not all eco-villages hold to the same philosophies. Dure Village in Hamyang County, North Gyeongsang, started out as an eco-community.

“Organic farming alone is too little to resolve the environmental problem,” says Pastor Kim Jin-hong, who lives in Dure. “It’s is our goal to make a model eco-community and encourage farmers to look into alternative energy.”

In 2002, Kim installed solar and wind generators in the village.

Mindeulle Community, which began as a regional missionary movement in Jinju in 1991, follows the model of a Christian collective. The houses are made of straw and clay, and workshops teach the residents about alternative technology.

Hongdong in South Chungcheong has focused on traditional farming methods since it was founded in 1958. An eco-community grew up here around an alternative school. About 90 households (230 residents) live here today. Every year about 20,000 tourists pass through the village to see the farmers’ training center and the rural life museum.

There are urban models of eco-villages as well. Seongmisan in Mapo District in northern Seoul is a classic example. The community was formed by a team of 30 parents in 1994 who bought a 60-pyeong compound as a day care center in Mount Seongmi.

The residents teamed up in 2001 to stop the city from installing a drainage facility in the mountains that they opposed.

No one can predict how many more of these kinds of rural or urban utopias will spring up over the next few years, but looking at the state of the world economy and possible chances to the climate, chances are there will be more.

To get to Silsang Temple Village, drive past Jirisan IC on the 88 Expressway and follow the mountain road through the forest for another half hour until you reach the township of Sannae, near the city of Namwon, North Jeolla.