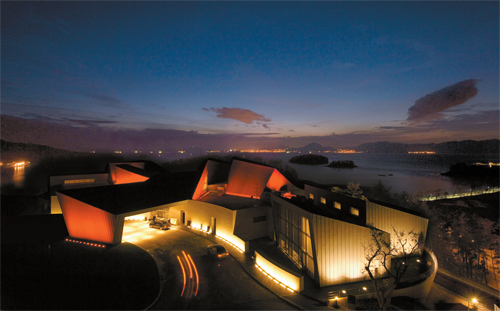 Hilton Namhae on the southern coast of the Korean Peninsula. [JoongAng Ilbo]

The five-day workweek here is helping to develop a different kind of holiday for tourists who now have more time to spend on leisure.

Korea has seen a surge in the number of self-catering resorts that offer a range of leisure activities and club-like pursuits geared toward the family.

The facilities under construction are a far cry from their predecessors, the more humble condominium-style accommodation options that have been so common in Korea over the past few years.

These are basically places to grab a light meal and lay your head down after a day’s sightseeing. 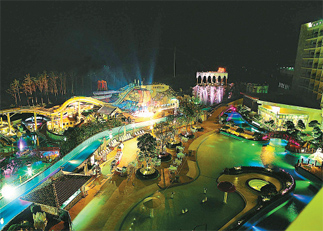 M Castle Resort in Yesan, which is located in South Chungcheong. [JoongAng Ilbo]

The high-end self-catering resorts now booming in Korea are far more luxurious, geared toward a range of leisure activities for all four seasons, such as water parks, outdoor activities for kids and other social pursuits.

Areas targeted for development lie primarily along the coastline of the Korean Peninsula.

Muchangpo Beach in Boryeong, South Chungcheong, is one such location.

Compared to nearby Daecheon Beach, which is known for the annual Boryeong Mud Festival, Muchangpo Beach is more secluded and is home to Beache Palace, a multi-complex resort owned by Yongpyong Resort.

This resort outfit opened its first facility, the Yongpyong Ski Resort in Pyeongchang, Gangwon, in 1973. 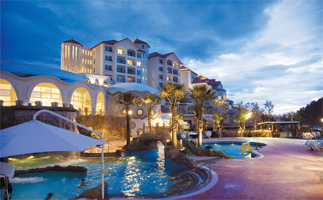 Beache Palace is the first facility that the company has built outside Gangwon.

The highlight of the new resort in Boryeong is an inner hallway that connects the lobby to the sandy beach.

All 236 rooms have ocean views and there’s an indoor and outdoor water park on the resort’s second floor.

In July, Daemyung Resort opened a new branch in Byeonsan, North Jeolla. The views are stunning because it is located inside the Byeonsan Peninsula National Park, which boasts a scenery of curious layers of rocks.

Even though it’s only five minutes’ walk from the resort to the sea, there is also a water park within the resort. All 504 rooms have ocean views as well.

Daemyung Resort now has the most rooms - 5,150 - among Korean resort companies, outnumbering Hanwha Resort, which has 12 resort branches nationwide.

And there are a lot more.

Phoenix Island in Subjikoji, Jeju Island, opened in April and Daecheon Fun Beach in Boryeong, South Chung-cheong, opened in May.

There’s Club ES in Tongyeong, South Gyeongsang, and O2 Resort in Taebaek, Gangwon, which opened this month, the highest resort in Korea at 1,100 meters (3,608 feet) above sea level.

In fact, ten high-end resorts have opened since 2005, six opening this year alone. Five more are due to open before 2010.

“The resort industry will continue to develop for a while,” said Park Seon-hyun, head researcher at the Hana Institute of Finance.

With more people looking for a better leisure culture, resort companies are looking for places to start business.

The peninsula’s south coast is one place that is particularly ripe for development since the scenery is beautiful but the accommodation is poor.

The big hotels are also trying to get a piece of the action. The Hilton group is behind the Hilton Namhae resort in Gyeongnam, Namhae, about two hours west of Busan. It’s Korea’s first Western-branded resort of this kind.

As tastes change and guests demand different services, the resorts adapt, too.

Phoenix Island on Jeju Island, for example, throws in breakfast for free, bringing in the bed and breakfast concept from the United Kingdom.

Guests have their own private beach overlooking the East Sea. It benchmarks Mediterranean resorts by creating an exotic atmosphere.

When you see these resorts, you realize how different they are to regular hotels.

Modern resorts no longer earn profit on the rooms as condominiums do. They make money by offering guests leisure facilities like theme and water parks.

Vivaldi Park in Hongcheon, Gangwon, for example, opened a water park two years ago. Before opening the water park, the resort was only popular during the winter because of its ski business. It’s now become an all-season resort.

Phoenix Park, known as a snow-boarders’ heaven, built a water park within its grounds.

The Hi One Resort built an Alpine Coaster, a 2.2-kilometer (1.4-mile) European monorail within the resort.

The luxury resorts are turning the entire hotel industry on its head and hotels are now beginning to import resort services.

For example, five-star hotels are providing summer packages for families and developing different kinds of programs.

The Shilla in Jeju Island has hired what it calls guest officers or leisure trainers, the kind of staff you encounter at Club Med.

Membership costs are heading north but business appears to be brisk.

“Though we cannot reveal the number of actual members, we can assure you that the number is going up,” said a resort-related official who asked to remain anonymous.

“If not, why would resort companies still expand their businesses?”

Sohn Tae-won, the owner of a string of small hotels on Jeju Island, explains: There’s a demand.

“Despite the bad economy, Koreans have a deeper understanding of the leisure culture,” said Sohn, one of the first generation of Koreans to take advantage of the relaxed travel laws in the late 1980s. He started his own small hotel business on Jeju Island in the mid-1990s.

He explained that many Koreans have now visited luxury resorts abroad and they expect something similar in Korea.

“It’s the law of supply and demand,” he said, noting that the resorts market will not contract or slow down for the time being.

But there are voices of concern.

“High-end resorts create bigger gaps between the rich and the poor,” said Seo Chun-bum, an official from the Korea Leisure Industry Research Center.

“It’s hard for the old condominiums to survive.”

Modern resorts that opened after 2005

2. A leisure resort with a golf course and ski slopes

2. A leisure resort with a golf course and ski slopes

2. A leisure resort with a golf course

3. Located in Subjikoji in Jeju