Horn of a dilemma

Horn of a dilemma 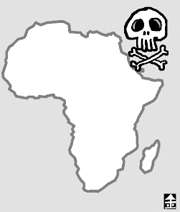 The Somali Peninsula, better known as The Horn of Africa, is the easternmost tip of the African continent. The region contains the countries of Eritrea, Djibouti, Ethiopia and Somalia, covering approximately 2 million square kilometers, nine times the size of the Korean Peninsula.

During the years 1982 to 1992, more than 2 million people in the region died in war-related famine. In particular, there were over 1 million casualties in Ethiopia due to the catastrophic famine, known as the Great Famine, in 1984.

The sad truth is that many people die from disease due to contaminated drinking water and unsanitary living conditions, as well as in famines. Currently, only 39 percent of the total population in Ethiopia has access to safe drinking water.

Neighboring Somalia also faces a similar threat. Somalia has been mired in chaos since 1991, when warlords overthrew dictator Mohammed Siad Barre and then turned on each other. As this area has been plagued by severe droughts since 2003, tribes have been known to slaughter each other for control of a well. Males have no choice but to become “well warriors,” while women have the misfortune of becoming “well widows,” due to tribal conflicts for water.

In recent years, the situation has been further aggravated by a countrywide drought and skyrocketing global food prices.

The United Nations World Food Programme warned last July that more than 14 million people are confronted by a serious food crisis, including 10.3 million in Ethiopia and 2.6 million in Somalia. Early this month, Unicef said that at least 3 million children are at risk of death, disease and malnutrition in the Horn of Africa, with the number of casualties showing a sharp increase.

Against this backdrop, local armies and armed villagers in Somalia began invading the territory of coastal warlords known to be engaged in piracy. Many foreign ships have been seized by Somali pirates off the coast of Somalia, holding crews hostage until the owners paid a ransom. Korean ships have been frequently hijacked by Somali pirates. The Korean tuna ship Dongwon in 2006 and the bulk carrier Bright Ruby this month are prime examples. The Horn of Africa is bumping its head against the world.

The UN Security Council has unanimously adopted a resolution allowing foreign warships to enter Somalia’s territorial sea. However, all these efforts are in vain.

First and foremost, the international community should be striving to relieve villagers’ pain before trying to resolve piracy issues.