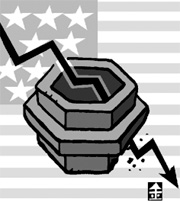 Everything was rosy in the 1920s along Wall Street. Investment fever was so intense that stock exchange booths were installed on ships crossing the Atlantic. The equivalent today would be buying and selling stocks when you are traveling on an international flight. Despite Prohibition, unlicensed bars flourished along this Manhattan street. Men in the money trade toasted each other, saying “It is illegal to make alcoholic drinks, but it’s okay to drink them.” The high rollers flush with cash, borrowed money from banks based on bloated credit.

The Great Depression started when the New York Stock Exchange crashed on October 24, 1929. The Dow Jones index dropped from 350 to 41 in 1932. Apparently, so many people hurt by the crisis committed suicide that hotel clerks asked those who made reservations, “Is it to sleep or to jump out?”

But even in the midst of the Depression, Wall Street wizards made money. They sold borrowed stock and then when the stock price fell, they bought it at a lower price.

They paid with stocks and profited with the difference through so-called short sales. For some time, Wall Street was deemed the enemy of the public. U.S. President Franklin D. Roosevelt, who established the New Deal, tried to reform Wall Street by regulating credit dealing and establishing the Securities and Exchange Commission. At the Senate, big investors such as J.P. Morgan were summoned to hearings and government cracked down on dissemination of false information, market price manipulation, insider trading, tax evasion and overpriced fees, that would be impossible in today’s information society.

The current U.S. financial crisis triggered by the subprime mortgage crisis is causing an international tsunami. The finger of blame is once again directed at excessive greed.

Financial engineering now uses mathematical and statistical tools, betting on weather conditions to predict future trading in agricultural products and turning mortgage debt into investment products that are bought and sold like bonds.

Financial engineering’s original purpose was to diminish risk, but there is criticism that its use had increased the risk levels and created opportunities for speculative capital to flourish. We also hear that the current crisis is the prelude to the demise of American-style financial capitalism, which began with Reaganomics in the 1980s.

Once the big investors on Wall Street have finished their feast, how long will the small investors have to go hungry?