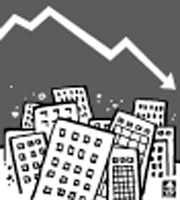 Indicators based on social phenomena and human behavior have been suggested as a tool to help us grasp the scale of economic disaster. The American financial industry may not be able to transform itself into a knight in shining armor, but things can’t surely be as bad as they seem.

The following are signs to ascertain whether we are in a crisis as suggested by Todd Harrison, who claimed in his April 9 MarketWatch commentary that the United States has not yet reached rock bottom.

Second, Alan Greenspan, the former chairman of the Federal Reserve Board, is still getting paid to speak. In reality, he is the real culprit behind this financial crisis, as he took the lead in maintaining interest rates too low for too long.

Third, Americans still take pride in their big houses. The housing market will hit bottom only when living in comfort without owning a house becomes all the rage.

Fourth, there is no nationwide campaign to collect gold to help the country recover. When the government tries to appeal to national emotions we are finally at the bottom. The 9/11 crisis, for example, imbued people’s minds with patriotism.

Sixth, a bank employee can still tell people his occupation at a cocktail party. Unless people rush to grab his neck, we are not yet in a real financial crisis.

Seventh, if a securities dealer runs away, it is a false bottom. However, if a private investor chasing him commits suicide, it is the real bottom. Still, there are not so many American securities dealers who are running away.

Eighth, American home prices, which have increased 89 percent over the last six years, dropped by 15 percent during the last year. There is a long way to go until we reach the first line of defense, which regulates the return of a 30 percent increase in the upswing.

Ninth, we haven’t begun a bloodletting against failed CEOs. Merrill Lynch’s executives will still get a bonus of some $200 million.

Twelfth, U.S. House Speaker Nancy Pelosi said, “We will simply not hand over a $700 billion blank check to Wall Street.” If a bailout fund comes with some strings attached, its effect will be reduced by half.

Thirteenth, the world gyrates between hope and fear, depending on the American government’s emergency measures. The real bottom will come when everyone is driven to despair.

Fourteenth, many people are still reading this. Thus, according to the indicators above, we can be thankful that we haven’t hit the bottom of the crisis.