What happens when intelligence fails

What happens when intelligence fails 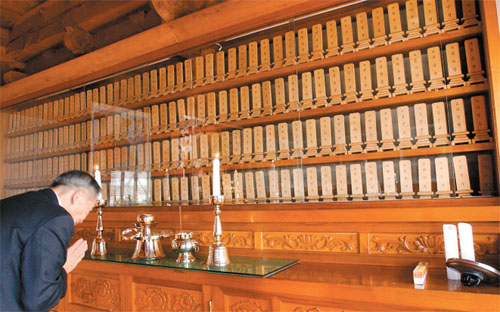 The intelligence services are floundering.

At least, that was the impression Defense Minister Lee Sang-hee gave when he addressed the National Assembly’s defense committee.

“As feared, we have confirmed that a North Korean defector is in fact a spy,” Lee said. “I think there is a very real possibility that we could encounter a similar situation in the future.”

The South Korean intelligence community has long prided itself on its intelligence-gathering capabilities with regard to the North. But recent events have tarnished its reputation.

The nation was shocked to learn of the Mata Hari-like scandal in which a female North Korean spy posing as a defector slept with several South Korean military officers in order to obtain sensitive intelligence.

And critics have blasted the agencies for the lack of intelligence on the fatal shooting of a South Korean tourist at the North’s Mount Kumgang resort.

In pointed remarks, Grand National Party floor leader Hong Joon-pyo recently questioned the role of the National Intelligence Service, bluntly saying that it was not earning its pay.

The intelligence services have access to funds estimated at between 800 billion won ($715.1 million) to 1 trillion won through various government budgets.

Following a reshuffle of senior officials at the NIS in March, which saw more than half of the 30 or so first grade officials change positions, several senior officers in charge of North Korea affairs were removed from their posts just last week.

A Blue House official said the measure was intended to bring in experts and strengthen the department. A reorganization of the service is expected to be concluded by the end of the year.

Several former and current officials all blamed one cause: A decade of liberal administrations that tried to engage Pyongyang and as a result deliberately reduced the scope of intelligence activities on North Korea.

While none of the intelligence services will fully admit how many North Korean spies have been exposed, citing security reasons, snippets released here and there paint a picture in which counterintelligence operations seem to have taken a backseat to other issues in the last decade. 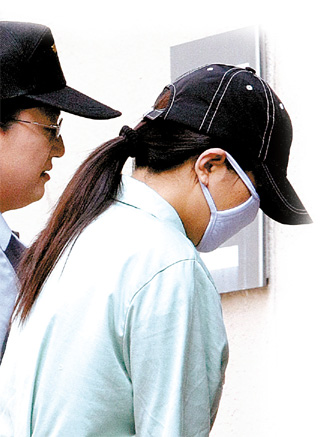 Grand National Party lawmaker Song Young-sun, who sits on the National Assembly’s intelligence committee, revealed in 2006 that between 1998 and that year, 60 spies have been apprehended. The NIS caught 42, while the police and military nabbed the rest.

Based on information from the various agencies at the time, Song said that the country’s counterintelligence capabilities in terms of manpower and logistical support had declined between 30 to 50 percent compared to 1993.

Some point to a systematic purge in the departments dealing with North Korean intelligence.

In 2000, there were 800 police investigators dealing with spy cases and breaches of the National Security Law. As of February that number has been reduced to 370, according to material submitted to the National Assembly earlier this year. With 242 closed spy cases in 2001, the police only had 39 to show for last year. 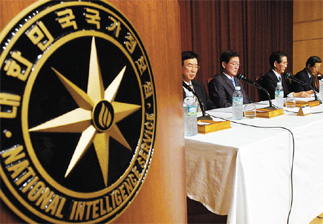 The National Intelligence Service was accused of illegal eavesdropping in 2005. Pictured are senior NIS officials announcing the interim results of an investigation into the case.

“Intelligence officials in charge of North Korean affairs were assigned to different departments or were forced into retirement. For those who stayed, promotions came rarely,” said a former Defense Security Command official, who declined to be named.

A former NIS official claimed that hundreds of personnel had to leave the service at the beginning of 1998 when the Kim Dae-jung administration came to power.

But with an apparently skeletal intelligence service, the latest media buzz over the health of North Korean leader Kim Jong-il has been surprisingly rich in detail.

Kim, according to the NIS, is recovering from surgery following an apparent stroke. Citing senior government officials, some local media have reported that rather than being the Dear Departed, the Dear Leader has recovered to the extent that he can brush his own teeth.

A former intelligence official who declined to be named threw doubt on the credibility of such reports. “Even when the human intelligence network was good, we never had that sort of information.”

“How many people in the North know that the Dear Leader is brushing his own teeth?” the former spy said.

He explained that in the spy trade, protecting sources was just as important as getting the intelligence.

“When you know exactly how many people have access to certain information and there is a leak, it’s very easy to find the source of the leak.

“Unless you want to give up your Deep Throat and end your relationship, you don’t reveal information like that to the public.”

Another factor holding back the intelligence services is the political appointment of individuals or those connected to the inner circle at the top of these professional spy organizations, some career intelligence officers complain.

According to insiders, “outsiders” with good political connections have in the past been appointed to head the spy agencies, even if they do not have the relevant experience or knowledge.

The current head of the Defense Security Command, Army Lieutenant General Kim Jong-tae, is a case in point. The general had been serving his term out as deputy commander at the Training and Doctrine Command, considered an honorary post for generals hanging up their hats for good, sources say.

This is often done in order to secure strong allies within the powerful intelligence organizations.

Moves like this have led to further outsider appointments to top jobs within the intelligence services, and for some it’s a shocker.

However, for political analysts the move is not a complete surprise.

“There are two reasons. First, as an outsider it’s much easier to purge people.

“Second, political appointees have an unquestioning loyalty that makes it easier to implement policies,” said Kim Seong-jeon, an expert on military affairs and a retired lieutenant colonel.

Take for example the DSC, which has always been a thorn in the side of the traditional military establishment.

Apart from intelligence and counter-intelligence duties, the command allocates a good chunk of its time to monitoring the top military brass, including regular checkups on the whereabouts of generals and their daily routines.

Experts say that if the administration had more control over the DSC, this would automatically lead to control of the military.

History proves that the role of the DSC cannot be underestimated. When former president Chun Doo Hwan took power in a coup in 1979, he was the head of the DSC, effectively controlling all information and keeping potential opposition within the military completely in the dark until forces loyal to him secured key positions and took control of the government.

Imagery intelligence (Imint) and human intelligence (Humint) are mostly provided by the Defense Intelligence Command, which, with the NIS, is jointly in charge of commandos.

The health of North Korean leader Kim Jong-il is certainly a main area of interest, as the current ballyhoo has proved. There are analysts at the NIS whose sole purpose in life is to track every move the North’s leader makes, including behavioral analysis.

Where he goes, how he walks, the color of his skin and how he carries himself are all recorded and analyzed. This is how the intelligence services concluded that the North Korean leader is suffering from a variety of serious illnesses including diabetes.

In 1974, both Koreas signed a pact vowing to halt all clandestine operations in a bid to reduce tensions on the peninsula, but neither side has completely stopped spying on its neighbor.

With the passage of time, only the methods have changed. Until the 1990s North Korea was still trying to infiltrate the South with some old-style commando insertions. In 1996, a North Korean submarine ran aground on the South Korean coast, allowing 26 commandos to swim inland.

But entering South Korea via a third country is now a cakewalk that has made the good, old-fashioned commando raid a matter of practicing skills rather than a vital intelligence mission.

“It’s more of a practice routine to prepare for a war rather than collecting intelligence,” said an official with the DSC, adding that active command insertions into the North stopped in the early ’90s.

Nowadays, operations only extend as far as the demilitarized zone. “Even in peacetime you want to see what infiltration routes work.”

North Korea is believed to field the largest contingent of special forces - an estimated 100,000 - which play a crucial part in the North’s invasion doctrine of the South. They are tasked with wreaking havoc in the rear, cutting off vital supply lines and decapitating military commands.

Intelligence officials say that North Korea is sending orders to its embedded spies here via digital signals, which are much harder to decipher than analog signals in Morse code.

This change is believed to have occurred at the end of last year. With analog signals, codes are easy to break if the key is known.

Seeing a new occupant in the Blue House as an opportunity to recapture some of its lost power, the National Intelligence Service earlier this month asked for permission to wiretap cell phones.

The practice was abolished when the service destroyed all its equipment in 2005 over a scandal involving illegal eavesdropping.

The intelligence services’ old habit of being involved in political affairs has certainly not helped the NIS’s bid to widen its scope of activity.

Even the ruling Grand National Party has tiptoed around the matter, saying it’s too early to discuss the issue.

The party is busy supporting the resurrection of the Lee Myung-bak administration after months of paralysis brought about by protests over the resumption of imports of U.S. beef.

Intelligence officials warn that in the past 10 years, North Korea has very likely obtained a full suite of basic information on military installations, industrial facilities and security targets.

While efforts are now under way to regroup, one official from the DSC pointed out that the past decade of liberal rule did help in one area: “Now we know who in our society is standing on which side.”