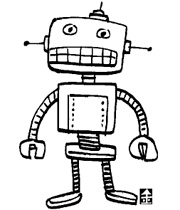 “Elektro” was the nickname of the world’s first robot, showcased at the 1939 New York World’s Fair by Westinghouse. The electric-powered robot could walk - although not smoothly - and say 77 recorded words.

Robots nowadays are prevalent around us. They are indispensable tools in all facets of modern life, including car manufacturing, surgery, space and underwater exploration, military strategy and pesticide spraying. Many robots are mass produced and sold for use at home. The Roomba vacuum cleaner from U.S. company iRobot, the AIBO robotic pet dog that can “feel” from Japan’s Sony, and Hong Kong toy company WowWee Ltd.’s toy robot RoboSapien, are major examples.

Robots resembling people appeared in 2005 at the Japanese Robot Mania World Exposition in Aichi. A professor at Osaka University developed a beautiful female robot called Actroid ReplieeQ1. It had soft silicon skin and could move its eyelashes and eyeballs, able to express different emotions. Though limited, it could speak English, Japanese and Korean. Apparently, there were few at the site who realized she was a robot.

Here, we are reminded of Gigolo Joe, the male robot character in Steven Spielberg’s movie, “Artificial Intelligence.” Perhaps highly skilled sex robots with ideal looks will soon make their appearance. Henrik Christensen, the founder of the European Robotics Research Network, predicted in 2006 that, “In the next five years, we will be able to enjoy sex with robots.” If so, the problem of prostitution will be solved, but there is concern about the effect this could bring on the human instinct. The closer robots become like humans, the greater the concern.

If we look at the present speed of development in microprocessor and artificial intelligence technologies, experts predict that by 2030, we will have robots with intelligence commensurate to humans. David Levy, a British artificial intelligence researcher, presented a paper last year claiming, “In 50 years, humans could marry robots.” This is akin to a British government paper released in 2006 that foresaw, “In 50 years, robots will claim the same rights as humans.”

Next Monday, a special law on robots, “Law on Development and Distribution of Intelligence Robots,” will come into effect. The government is also drafting a Robot Ethics Charter. It is expected to stipulate that humans cannot harass robots and vice versa.

It is akin to regulating future reality based on present-day ethics and technology. It is easy to criticize having sex with robots as the end of humanity, but it is simply looking toward the future.