Does mother know best, or not enough?

Does mother know best, or not enough? 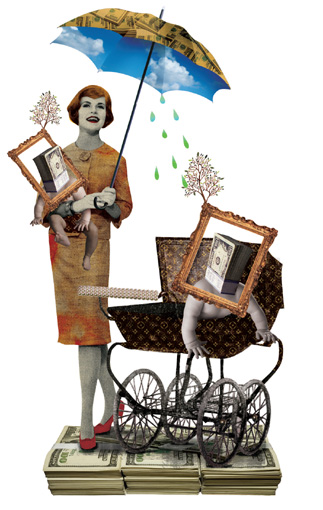 Back in the good old days, it was much simpler to raise a child in Korea.

When Ahn Ju-young was growing up in the ’80s, people used to say that all a kid needed to get a good education was a bright mom and a hardworking dad.

“We joke that now you need a well-connected mom, a supportive dad, a rich grandfather, a loving nanny and a tough kid to send him to a top university. The competition has just gotten out of control.”

The double whammy of parents having fewer kids and more money has fueled a phenomenon dubbed the “Golden Kids” syndrome.

The birthrate has risen marginally in the past two years, but still languishes as the lowest in the world, remaining at 1.26 children per household last year.

Another survey by the National Statistical Office revealed that money spent on private education for the first half of the year added up to 15 trillion won, a record.

So younger parents with only one child (or fewer children) invest in extravagant rituals for their kids, like costly horse riding and golfing classes, or arranging children’s birthday parties at exclusive members-only clubs or five-star hotels.

“It may be a generational trend,” says Kim So-hee.

Kim admits to being shocked when her kindergarten-age daughter was invited to a hotel swimming pool for her classmate’s fifth birthday party.

In the past, when class mobility was more flexible, investment opportunities came through more easily, and success wasn’t just about social status and expensive education.

During the ’70s, thousands of South Korean migrant laborers sent home a wealth of foreign cash on the back of a construction boom in the Middle East and Vietnam.

Many of today’s major political figures and conglomerate heads have rag-to-riches stories to tell. Perhaps the best known is of President Lee Myung-bak, who was born to farmer parents in the rural city of Pohang and later became the legendary CEO of Hyundai Construction. 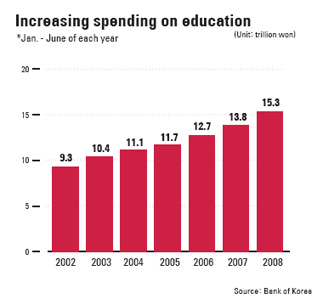 But as the capitalist economy matured and unemployment rose, education became the single most effective option to join the elite circle.

“In the past, mothers would put down home addresses in neighborhoods where they wanted to send their children to schools,” says Kim Ju-hee, a professor of family culture and consumer science at Sungshin Women’s University.

“But it was usually only middle-class families. Now, even working class mothers are doing it.

“On top of all the sacrifices they already make, young Korean mothers today are pushing to maximize their social network using all their connections.”

“The cultural environment of these mothers is quite ambiguous,” said Kim So-hee.

“They don’t all come from rich families, but they are very much influenced by the popular images of celebrity mothers in Hollywood who carry their children in a German baby stroller with a bottle of Fiji water in their hand and a Filipino nanny next to them. For them, it’s all about glamor.”

When it shifts from fashion to education, the pressure is exponential.

This often forces mothers to make extreme choices like leaving their husbands at home while they go abroad with their children for education in countries like the United States or Canada.

“Sometimes, I feel like I’m wasting my time here by spending my entire day shuttling my daughter back and forth, and it’s only going to get worse when she actually goes to school,” Kim continues.

“Some mothers bluntly tell me that I should be thinking about getting my kid out of here now.

“Even if I can’t afford to go to the U.S. or Canada, they still tell me that I should move to a country in Europe or Africa, let the kids study there for a few years, and come back when they are eligible to apply for international schools here.”

For those whose only option is to stay, though, plans to send their children to top schools start as early as the kindergarten years.

An average Korean parent spends four times more on private education for their children compared to other OECD countries, according to a recent survey by the Bank of Korea on consumption per household.

English kindergartens taught by native English-speaking teachers have become the norm in many areas across Seoul.

In the past, putting young schoolchildren through English summer camps overseas made news here. Now, the business of overseas study in countries like Canada or New Zealand is so common that every detail is mapped out, from the available types of homestay programs to host families serving as private tutors for young Korean schoolchildren.

By the time kids enter grade four or five, most Korean parents have put their kids through cram schools in addition to signing up for as many as five or six classes of extracurricular activities.

Kim Hye-jung, editor of the book “The Children of Double-Income Parents Cannot Go to Seoul National University,” by Lee Hyung-mi, says the anxiety for parents starts at elementary school.

“That’s when most Korean mothers make their final decision whether to give up their career or compromise their children’s education,” says Kim, who has a son in a primary school.

“The author provides a major turning point in parenting, because it encourages Korean mothers to play the role of their kids’ managers rather than their assistants. It forces them to make choices they can and let go of others.”

The book, which dips into practical tips for working mothers to prepare their children to go to top schools, has sold 10,000 copies since last year.

Often, the anxiety-driven competition strikes horror into the hearts of many Korean parents, especially working mothers who can’t devote their full energy and time to their children.

“Nobody’s going to give me the information I need for my child if I just sit around here. Even if I hear it, I’m afraid that I wouldn’t be able to pick it up.”

Bae Hyun-joo, a physician at a university hospital and the mother of a 16-year old son, was willing to suffer.

In a rare case of luck for working mothers, she was included in a discreet circle of stay-at-home mothers at her son’s high school who knew the best teachers and cram schools in town.

In exchange, Bae slotted their kids into a special internship program run by her hospital lab, which counts as an extracurricular activity for admissions to some Ivy League schools.

But when the pressure became too overwhelming among the mothers, she and her husband decided that they would send their only child to a boarding school in Vancouver, Canada.

She feels it was the right decision, but also admits that her case was only possible through the privilege of her family’s comfortable financial background. “There was an atmosphere of sheer madness that I couldn’t tolerate,” she says.

“It somehow took great courage not to be bothered by what the other mothers had to say. I always thought that I had a clear vision of how I wanted to raise my child, but it didn’t work. But after all, nobody wins a fear game, especially when it comes to your child.”