[DVD review]The psychiatry of being popular

[DVD review]The psychiatry of being popular 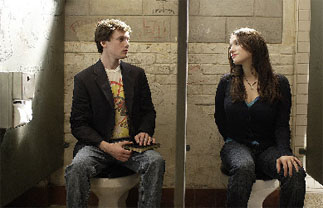 By Hannah Bae Contributing Writer
Watching “Charlie Bartlett” on DVD, I regretted not catching it in theaters here in July. It’s a silly high school comedy, but it manages to capture the angst of the teenage years in a charming way, beating the pants off any movie on the big screen this month.

Leading the charge is the film’s title hero, Charlie Bartlett (Anton Yelchin). Although he’s been expelled from a string of prep schools, he’s not your average juvenile delinquent: Charlie is a sweet kid - he earnestly befriends the special-ed kid on the bus to his new school without batting an eye - but one with the unfortunate, overwhelming desire to be popular.

To add to this character flaw, Charlie’s MILF-y mother, Marilyn (Hope Davis), treats him like an adult, providing him with nearly no direction. “Well maybe there’s more to high school than being well liked,” she says, before admitting that nothing else comes to mind.

So it comes as no surprise that on Charlie’s first day of public school, he’s mistaken for a teacher and later beat up for wearing a blazer and tie. Initially, he’s reminiscent of Max Fischer in Wes Anderson’s quirky “Rushmore,” out of place in his premature adulthood.

But Charlie finds a way to capitalize on his blue-blooded existence: He gets prescriptions from his family’s various psychiatrists and doles out the drugs to his classmates.

Aside from his first drug-dealing episode in which he turns a high school dance into a Ritalin rave, Charlie is careful with the drugs. He sets up shop in two adjacent stalls in the boys’ bathroom, providing counseling and pills for his many troubled peers.

Charlie’s scheme scores him popularity and the most easygoing girlfriend ever, Susan Gardner (Kat Dennings), the principal’s daughter. Eventually, the drug dealing and dating attract the attention of Principal Gardner (Robert Downey Jr.), which begins a clash between a faux adult who commands authority and a real adult who can’t win kids’ respect.

But as flawed and weary alcoholic Principal Gardner is, he’s also the strongest adult character: “There are more things than popularity - like what you do with that popularity,” he lectures.

Charlie Bartlett takes place in a fantasy world where director Jon Poll and writer Gustin Nash can skim over details - Whose parents are that lax? What teenage girl is that kind? - but it’s a world that includes sharp, funny writing delivered by actors on point.

The film makes high school look a little too easy for a rich kid, but Yelchin is so endearing as Charlie, it’s hard to imagine anyone not liking him.