[Review]One hell of a ride with this dark fairytale

[Review]One hell of a ride with this dark fairytale 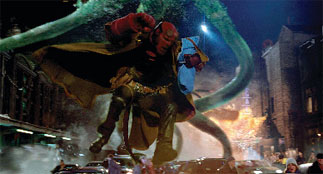 By Lee Ho-jeong Staff Reporter
With a box of popcorn in one hand and a Coke in the other I walked into the theater expecting to see another Hollywood-produced superhero action fiasco.

By the time I walked out I was confused about what I’d just seen. Was it an action film, a horror flick or a romantic comedy?

The answer is this: In “Hellboy II: The Golden Army,” it’s all mashed into one amazing film.

Yes, the second installment of Hellboy is undoubtedly a comic book-based action film.

There are more than enough rapid-fire action sequences to make you wonder if you’ve walked into a theater showing a Jet Li movie.

Unlike the first Hellboy, the sequel is more poetic, and the antagonist has a more noble reason for destroying the world as we know it.

The film raises the question: Is the bad guy really bad?

It also lightly touches on the issue of prejudice against anything that looks different from the norm, like many superhero movies today including “The Incredible Hulk” and “Spider-Man.”

However, such issues are not dealt with in-depth and they really don’t need to, considering that this is an action blockbuster rather than a serious A-list film.

Director Guillermo del Toro, noted for his artistic sense in films like “Pan’s Labyrinth,” has put his signature vision into this action film.

The creatures aren’t just ugly and gory as in the first film. Many of them have an elegant and fairy tale-like mystical appearance that makes their fantasy world more magical and beautiful.

The visuals of this film really make it stand out against other superhero films, which nowadays try to be as realistic as possible.

The movie follows a simple plot. Our Hell-spawned horned future destructor and current savior Hellboy (Ron Perlman), who is also referred to as Big Red at the U.S. Bureau of Paranormal Research and Defense where he works, learns that a fairy tale he was told as a boy of an indestructible mechanical force called the Golden Army is on the verge of being resurrected by a vengeful elf prince, Nuada.

Big Red, along with his comrades in arms, Abe Sapien (Doug Jones), Liz Sherman (Selma Blair) and new member and the leader of the pack Johann Krauss (John Alexander) have to stop the elf prince from getting his hands on a crown that commands the Golden Army.

Along the way Hellboy has to figure out what’s bugging his girlfriend Liz, while Abe finds a love of his own.

For those who are faint of heart, brace yourself. This movie starts off with the one of the most gruesome scenes I have ever seen. Hellboy interprets the tooth fairy into the most twisted, vile creature.

This disturbing feeling hits a peak when a group of U.S. agents enters a room covered in excrement that the fairies unleashed after devouring a large group of people at an auction.

Hellboy may not be your usual charming superhero, but he sure gives a hell of an exciting beating that makes your time worthwhile.