[Viewpoint]Getting back on the bike

[Viewpoint]Getting back on the bike 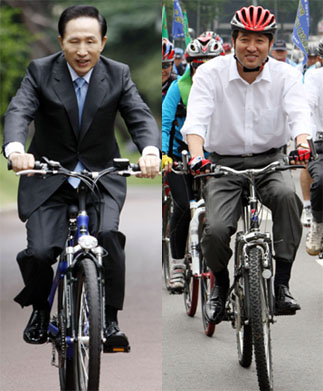 The Kroller-Muller Museum is located in a national park in Otterlo, about 80 kilometers (50 miles) from Amsterdam in the Netherlands. Although I’ve never been there, I still can’t forget the name of this art museum in a faraway land that I read briefly about over two years ago.

Along with the Van Gogh Museum in Amsterdam, the Kroller-Muller Museum is well known for its extensive collection of Vincent van Gogh paintings. One of its most notable pieces is “Cafe Terrace at Night.”

The strong impression was left not just because I am an avid fan of van Gogh. Rather, I remembered the museum because you can ride a bicycle from the entrance of the Hoge Veluwe National Park to the museum.

“As I rode my bicycle along the road lined with tall, straight beech trees, I felt like I was in a movie and became strangely emotional. The fresh scent of the forest and cool breeze reminded me of a scene from a romantic film, and I found a sign for the museum after about 30 minutes of riding.”

This is as romantic as it gets, but reading the passage made me sigh sadly. Unfortunately, I had never learned to ride a bicycle, nor did I have a plan to ever visit this museum. I guess I could always walk there. However, I suddenly felt a pang of regret that I would never be able to ride the white bicycles that visitors can borrow from the park for free.

When I was young, my father told me not to ride a bicycle because it could be dangerous, and I followed his advice. As I grew up and began driving, bicycles still seemed dangerous to me. I was scared for the kids who would suddenly appear from out of nowhere on their bikes. Bicycles were obviously dangerous on urban Korea’s busy streets, especially for children.

Lately, riding a bicycle has become a different experience. These days bicycles are no longer seen as dangerous - they are romantic, eco-friendly and healthy.

Riding a bicycle is now considered a “cool” way to express your personality. The famous Korean writer, Kim Hun, traveled around the country on a bike in his 50s, and wrote a book, “Bicycle Tour.” In it he said that when he moves forward on a bicycle, the roads around are absorbed into him.”

A bicycle is not just a two-wheeled vehicle. It symbolizes the values of a simple, analog-age life, which stands out in today’s fast-paced modern lifestyle.

Now that we live in high-rise apartments, we have forgotten the scent of the earth. We have exchanged fresh air and clean streets for cars.

To the people who no longer have the chance to experience the sunshine and clean air, nor the time to leisurely enjoy the scenery, bikes bring back much more than you can imagine.

Recently, I bought a bicycle and began learning to ride.

I don’t expect as much romance as the road to Kroller-Muller. Instead I have to make do with bike paths around Seoul, along the Hongje and Yangje streams and the Han River. However, I have not completely gotten rid of my perception that bikes can be dangerous.

Sept. 22 was Car Free Day in Seoul, and President Lee Myung-bak and Seoul Mayor Oh Se-hoon rode to work on their bikes.

The National Police Agency announced on Sept. 24 that it would draft a revision to the laws and regulations related to riding bikes.

We need to expand the bike paths and increase the bicycle parking spaces at various stations and large buildings. The authorities need to review specific plans to implement a safe bicycle culture, including whether or not to make helmet wearing a requirement by law or let individuals decide.

My septuagenarian father has started riding a bicycle for exercise. And thinking of him riding his bike where there’s no bicycle-only path is far from romantic - it’s almost scary.