A walk on the wild side

A walk on the wild side 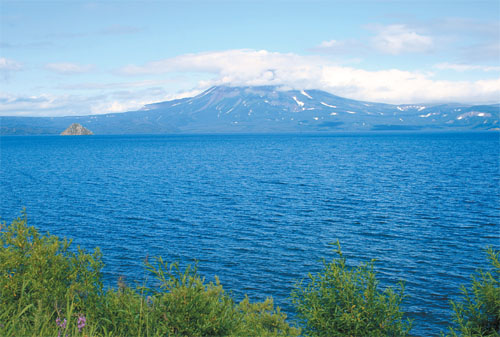 The view at Lake Kurile.

A dozen bears had surrounded us, and they were closing in. Lucky for us, then, that they were far too busy foraging for berries to care about our intrusion on their turf. Only a trio of cubs, their teddy-bear ears twitching in the tall grass, seemed anxious.

“If they feel threatened,” explained our warden Vladimir, “they’ll try to look more intimidating.” As if on cue, one reared up on its hind legs and bared his gnashers in a disdainful snarl.

But after the host of arthritic Soviet-era aircraft we had to take to get here, there was no way we were turning tail. And anyway, along with his fatigues and Che Guevara-like beard, Vladimir had a rifle.

It was our third day in Kamchatka, one of Russia’s most fascinating regions, and an area of stupendous natural beauty. It’s twice the size of the Korean Peninsula, but home to only 400,000 people. 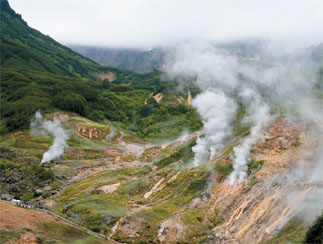 On a map of Russia, Kamchatka is as far east as east can get, straddling the Sea of Okhotsk to its west and the Pacific Ocean and Bering Sea to its east.

Its appeal is simple: unbridled wilderness. In the summer, the peninsula’s 29 active volcanoes offer walkers and climbers otherworldly vistas, while daredevil heli-skiers swoosh down their slopes in the winter.

And if rafting, fishing, dogsledding or hunting aren’t your thing, have a relaxing dip instead in a curative thermal pool.

Brown bears have free rein of the lakes and forests. Come at the right time of year, and you’ll catch them lined up on the riverbanks, stuffing their snouts with flapping salmon. 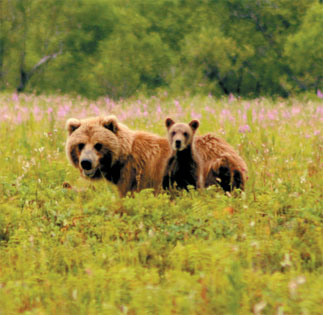 Bears graze on a tundra near Lake Kurile

The best place to go bear-watching is at Lake Kurile, a crater lake on the southern tip of the peninsula that’s a huge spawning ground for salmon.

The area is a state-protected nature sanctuary, so it’s only accessible by helicopter and visitor numbers are tightly controlled. In fact, there’s only one place to stay: in a Hobbit-eqsue wooden guesthouse, under the friendly but watchful eye of Vladimir and his wife Elena.

Game walks are twice a day. You usually head to the bear-watching platform about half a mile from the guesthouse, elevated a safe distance from bears eating, hunting and snoozing.

But be warned that this holiday doesn’t suit everyone. For a start, the weather is frustratingly temperamental. You can only get to most of the good stuff by chopper, but if visibility is poor - as it often is - and you’re grounded, there aren’t many obvious distractions.

Many visitors find themselves doing laps of Petropavlovsk-Kamchatsky, the tiny capital. Like many of its counterparts across Russia, it’s a strenuously ugly city dominated by Soviet-era concrete apartment blocks and a few basic cafes. 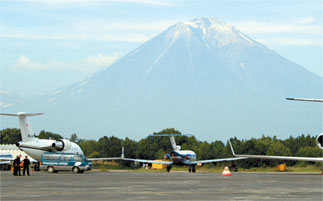 Top: A bear hunts salmon at a river near Lake Kurile. bottom: A walrus in Avacha Bay

The Volcanology Museum is open by appointment only, which leaves the local supermarket and the hotel bar - so the choice is obvious, really.

But Petropavlovsk’s squat, charmless architecture does serve as a reminder of the temptations that await. As Russia’s only volcanic zone, with frequent earth tremors, the buildings have strict height restrictions.

And a relatively accessible spot to see this terrifying tectonic activity up close is Mutnovsky Volcano, 70 kilometers (44 miles) south of the capital.

Still unable to fly, we were carted in a hefty six-wheel drive to base camp. The terrain was stark, its gray and silver rock broken by huge black boulders and occasional scrub.

Kamchatka was where, in the early days of the space race, the Soviets tested their first lunar vehicles - and in this unearthly landscape, it was easy to imagine Comrade Boris and his boffin mates tinkering with their spacecrafts.

The Valley of Geysers, an area of around 90 geysers and numerous hot springs, in the Kronotsky Reserve. Photos by Jill Thomas

It takes around three hours to hike up Mutnovsky. Although not technically difficult, there are several slippery patches of snow and areas of unconsolidated rock that can make navigation tricky.

You know you’re getting close to the crater when it starts getting whiffy. Although the sulfurous stench is like the devil’s own bathroom, the pulsating fumaroles and bubbling mud pots more than make up for it. There are pockets of rock in every imaginable color - blues, crimsons, yellows, purples and a particularly rancid green.

We couldn’t stay long, though, as the sunshine and light breeze had morphed into a beastly storm, with raw, strong winds.

By the time we got back to camp, we were sodden popsicles. And here’s the other reason this may not be everyone’s dream vacation: the unexpectedly extreme conditions. That night, the winds whipped through our campsite, rattling our tents.

We woke up the next morning to find that the toilet tent, a blue cubicle-shaped sheet, had abandoned the hole in the ground it once shielded. One of the kitchen tents had also fallen victim to the elements.

It was ghastly, but still a damn sight better than skulking around Petropavlovsk. And the sheer misery of it, plus the loo with the best view that I have ever used, gave us something to laugh about as we sat huddled and soggy in the remaining kitchen tent.

It also makes the drying off and warming up all the more satisfying. After a restorative soak in the thermal springs at Paratunka, a small village halfway back towards Petropavlovsk, we decided to let someone else do the hard work for a change and booked up a boat cruise of Avacha Bay back in the capital.

The port is unkempt, a graveyard of rusting ships and overgrown weeds. But Avacha Bay, which opens on to the Pacific Ocean, claims an exotic history.

It was here that Petropavlovsk’s founder, the Danish explorer Vitus Bering, landed in 1741. Many other famous pioneers, including Captain James Cook and his protege Charles Clerke, have sailed into these shores.

It’s the view sailing out, though, that’s amazing. Even if it’s cloudy, the waters sparkle a crystalline blue. Curious seals pop their heads out of the water as you pass, and there’s a pudgy walrus sunbathing on some rocks. Puffins, their bright orange legs flailing comically out behind them, dive for fish.

They say that good things come to those who wait. And wait you will, for your visa, at airports, helipads and goodness knows where else for the weather to get its act together. Is Kamchatka worth it? Absolutely.

Asiana Airlines and Dalavia-Far East Airways both fly several times a week to Khabarovsk, from which a flight to Petropavlovsk takes approximately 2.5 hours.

Independent travel is possible, but it’s best to book a tour with a reliable local agency as having a set itinerary cuts down on waiting time. We used Kamchatka Lost World Tours (www.travelkamchatka.ru).