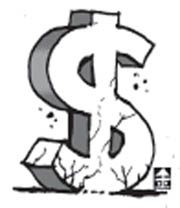 The silver coin bearing the portrait of Roman Emperor Domitianus was the strongest and most important currency in the world. With its 100 percent silver content, the denarius was the most common coin produced for circulation during the Roman Empire. However, in the midst of an economic meltdown in the 3rd century B.C., the silver content of the denarius began to be gradually reduced.

The copper content of the Roman denarius soon exceeded as much as 95 percent, with a silver content of just 5 percent. It was more a silver-plated copper coin. The world began ignoring it, and the Roman coin lost its function as a key currency.

The Roman denarius, the British pound and the U.S. dollar are historically the three leading currencies that ruled the world. If a superpower’s currency establishes itself as the world’s major currency in international transfers, it becomes very powerful.

The seigniorage effect is a prime example. The currency in which each penny is spent has an enormous value in exchange. Currently America issues countless numbers of colored pieces of paper to the world and imports goods into the country. Thanks to the seigniorage effect, the U.S. economy has stood firm despite an annual trillion-dollar deficit in finance and trade.

However, the sun does not always hang high in the sky. If the economy remains sluggish and its currency value is depreciated, a key currency can no longer maintain its position. The only way to regain its prestige is to take the “Bagehot solution.” As editor in chief of The Economist magazine, Walter Bagehot advised the government to raise interest rates and spend a huge amount of money on promoting the development of blue chip companies when the British pound showed a sluggish growth outlook and gold slipped out of the nation. The pound, however, miraculously escaped this fate.

Due to unfavorable winds from the U.S. financial crisis, we are witnessing unusual changes in skyrocketing dollar values. Yesterday, the won-dollar exchange rate exceeded 1,200 won. It may be a temporary phenomenon as U.S. financial companies in trouble struggle to take dollars from overseas.

According to Bagehot’s solution, America is still immersed in adopting only half-right solutions. It seems to be busy trying to release money on the market via relief loans, rather than raise interest rates. If they leave it as it is, the U.S. dollar will soon collapse.

Can the dollar be saved like the pound or will it breathe its last like the denarius? The dollar is standing at a difficult crossroads.