Dancing the night away in Seoul’s hottest clubs

Dancing the night away in Seoul’s hottest clubs 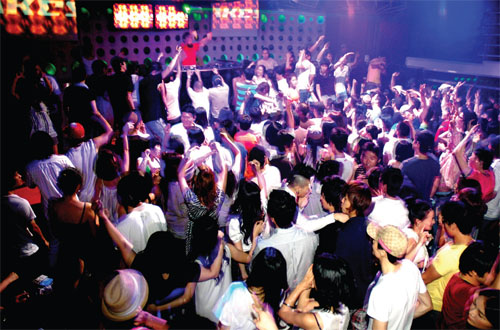 While shaking it on the dance floor has long been a popular way to enjoy the nightlife in many a city, there are still those in Seoul who see clubbing as more of a burden than a joy.

Questions can overwhelm these folks before they even get past the bouncer.

What’s the dress code? What are the crowds like? 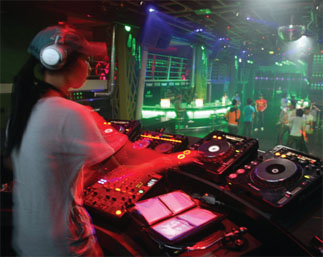 One woman recently posted the following question on an Internet portal site: “I’m in my late 20s. Am I still allowed to go to clubs in Seoul?” Another woman asked, “I’m a 28-year-old female office worker. Do I have to wear a tank top and hot pants?”

On a recent weekend visit to Club Volume in Itaewon, young visitors were seen sliding out of their luxury imported cars before slinking down into the club, which is in the basement of the Crown Hotel. Volume is known as a high-end club filled with Seoul’s rich and famous, especially the children of conglomerates. But the crowd gets more varied on weekend evenings.

People inside the club are dressed like the people you see on Seoul streets, well, with a slight twist.

One girl was wearing a minidress and a crown adorned with a feather, while many women wore sleeveless tops with skinny jeans or miniskirts. Men seemed to favor the simple T-shirt and jeans, although some were smartly decked out in suits.

Park Eun-young, 25, who goes clubbing once or twice a month says, “Compared to the clubs in Hongdae, people here are more fashion-conscious. And in Gangnam, people wear outfits that are more classy.” Along with Itaewon’s Volume, Gangnam’s Mass, Answer and Circle are hot clubs at the moment.

As a general rule, the four aforementioned clubs don’t admit people who show up in shorts, casual sandals or sweatpants. This means it’s safer to show up as if you’ve just come from work than looking like you’ve just been to a baseball game.

Unlike hip-hop clubs in the Hongik University area, known as Hongdae, such as Harlem or NB, hip-hop styles are not appropriate at electronic music clubs in Gangnam, except when they’re having a hip-hop party. Kim Ki-bum, of Club Answer, advises patrons to dress neat and sexy if they want to get in, and to stick to the dress code if there is party with a theme, such as on Halloween.

Is there an age limit?

Commonly people think only young people go clubbing. But how do we define “young” these days anyway?

Students in their early or mid-20s tend to go clubbing in Hongdae, whereas people in their late 20s go to clubs in Gangnam or Itaewon. According to Kim, ages range from the early 20s to mid-30s.

Comedian and musical actor Rocky Hong, who is known around town as something of a club fanatic, says, “Age is not important. As long as a person is trendy, enjoys club music, and most of all, has a young mind, he can have fun.”

Do clubbers these days dance in “tecktonik” style to electronic music?

Since tecktonik - a wild, jerky dance style characterized by wide, sweeping movements - burst into Korean clubs and music videos early this year from France, it has been making quite a splash in Korea. Korean singer Hwang Bo sang the tecktonik hit “Getting Hot” while clad in brightly colored tights, and Koo Jun-yup also released a tecktonik album under the name D.J. Koo.

These four clubs mainly play electronic music, such as house or trance. These styles are similar to tecktonik music in the way they center on the beat rather than the melody and also give off a dreamy vibe through the repetition of electronic sounds. Many of today’s clubbers think they can dance in the tecktonik or “Melbourne Shuffle” styles, but in reality most people can’t.

The model-turned-D.J. Han Min says, “Dancing tecktonik, which involves big movements, could do harm to people in crowded clubs. “It’s better to dance at ease, just like you are communicating with the D.J. through the music,” she advised

Is anything unacceptable inside the club?

“Unless you cause harm to others, you can enjoy all the freedom you want in the club,” says Hong.

Answer’s Kim has a blacklist featuring those who have been too drunk, belligerent, or disruptive to the D.J.’s performance. “Unwanted physical contact is not acceptable,” Kim said.

“There are even men who come to clubs alone just to leer at girls, but never dance,” warns D.J. Han.

But as long as you’re not an intoxicated ogler with flying tecktonik elbows, the club can be a welcoming place - even to the most clueless patrons.