Recording history, one word at a time

Recording history, one word at a time 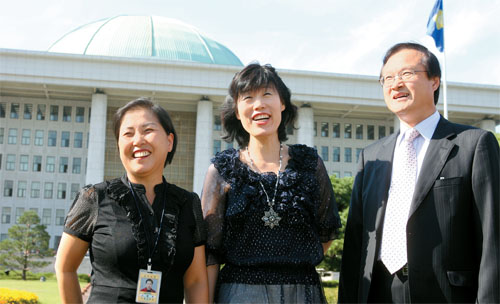 From left, stenographers Go Gyeong-ho, 50; Jo Young-gi, 51; and Lee Gyeong-shik, 53, who have each worked at the National Assembly for more than 30 years. [JoongAng Ilbo]


In this day and age, most lawmakers thank their lucky stars if they get re-elected for a second term.

Sure, there are some old-timers. A lawmaker who’s been at the Assembly for 30 years would have been voted in six times, a grand achievement by any political standards.

But it’s not just the lawmakers in the National Assembly who are veterans. Behind the scenes, there is a small group of people who have witnessed - and recorded - every debate, squabble and momentous event of the last 30 years: the Assembly stenographers.

Jo Young-gi, 51, Lee Gyeong-shik, 53, and Go Gyeong-ho, 50, have in their 30 years at the National Assembly, witnessed the ups and downs of the country’s history. The three now lead a group of younger colleagues. 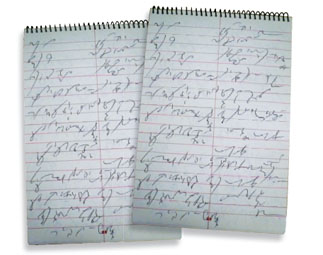 An example of shorthand that stenographers used before machines became prevalent.

During the 11th parliament, when former President Chun Doo Hwan ruled the country with an iron fist, the atmosphere at the National Assembly was chilling.

“I was on my way to work and when I arrived, there were tanks in front of the National Assembly. I will never forget that,” said Go.

Chun, an army general, had seized power in a coup in 1979. [Ironically, though, it was during his rule that the country began to lay the grounds for the full democracy as it is known today.]

So what do these keepers of our history actually do? The recording of the remarks and speeches made by lawmakers isn’t word for word as some might assume, as the grammar gets corrected later. And to get a grammatically correct version of a remark is a time-consuming process.

If a recording is done in shorthand, it usually takes up to 10 times as long to transcribe the entire session by hand. If a typewriter is used, the whole process takes three to five times as long as the original recording time.

As the country has steered its way to becoming a full democracy, the stenographers’ workload increased. Apart from regular National Assembly sessions, many more special sessions take place as political circles try to resolve differences. This means that the National Assembly is open practically all year round.

Unlike in the past, when military dictatorships determined the order of the day and National Assembly sessions tended to be more of a rubber stamp, sessions nowadays last much longer as it takes more time to reach a political consensus.

Also as more professionals join the ranks of lawmakers, the emergence of technical terminology has become another challenge for stenographers.

Previously, it was all about using the political vocabulary. “As we have lawmakers who have worked as professors and obtained their Ph.D.s abroad, English is mixed in with the Korean. There are some people who mainly use English,” said Go.

To keep up, she has her own little black book where she keeps frequently used terminology in the information technology sector and the names of various medicines. More recently, she had to study the various terms related to mad cow disease during the months of political turmoil over the import of U.S. beef.

But the most difficult cases for a stenographer are speeches made by lawmakers who have provincial accents and speak quickly. Often stenographers have to ask the lawmaker questions after they have delivered their speech to fill in the details in order to get things right.

Joy comes when stenographers become part of history or when exemplary speeches are made. For instance, when a new constitution reflecting the country’s growing democracy was made in 1987, Lee remembered how he was caught up in the moment. “I told myself that I was writing down history!” he said.

And even stenographers have their favorites. Former National Assembly Chairman Kim Soo-han is considered one of the best speech givers, along with Grand National Party lawmaker Hong Sa-duk. The stenographers say that they share common traits: an appealing voice, proper diction and eloquent speaking skills.

But it’s not only words, but the whole atmosphere surrounding a speech, that get recorded. “We can’t record all the facial expressions or gestures, but we try to portray the atmosphere by inserting words such as ‘smile’ to best reflect the mood,” said Jo.

One commonly made mistake by lawmakers is asking stenographers to erase the stenographic records when they want to retract a portion of what has been said.

“Erasing the stenographic records is forbidden by law. What you can do is make corrections,” said Jo. “Explanations given by lawmakers to convey what they really meant when they said something will be put alongside the original speech, but nothing gets erased.”

But as times have changed, so have their jobs. In the old days, stenographers’ uniforms were made at custom tailors. A full suit, shirt and even shoes were provided twice a year to males, while female stenographers received a two-piece suit with a matching blouse and shoes.

Back then, getting an outfit from custom tailors was considered a privilege due to the high price charged. Now, ready-made suits are issued only once a year.

The ratio of men to women has also changed. In the past, the job was held mostly by men, but today women account for 90 percent.

The art of stenography itself has changed over the years. Until 1995, shorthand writing was used but then stenograph typewriters were introduced. Nowadays, all incoming newbies use the machine.

“There is not a single place that teaches shorthand writing anymore,” said Ko. Nevertheless, there is still use for the old art when there are no power outlets or when the situation requires handwriting, such as when stenographers have to accompany lawmakers on inspection trips of government bodies.