Seoul digs the past

Seoul digs the past 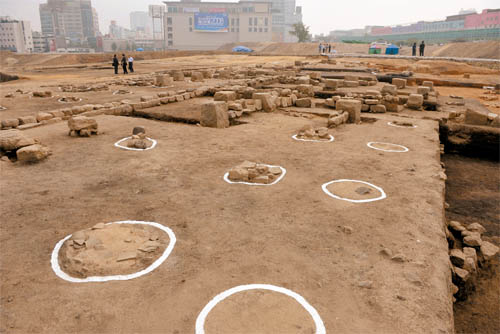 The excavation site where Dongdaemun Stadium once stood. [NEWSIS]

City officials in the capital are having to consider issues that former administrations rarely paid heed to: Do we preserve the past or do we push on with progress? 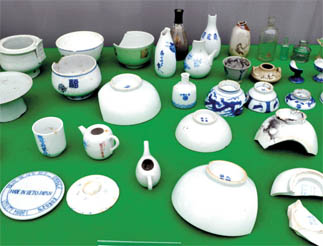 With the loss of Namdaemun to arson earlier this year and the controversy surrounding the Seoul city government’s stalled decision to demolish a part of Seoul City Hall, town planners appear to be more aware of the issues of cultural preservation.

This was not the case in the past. 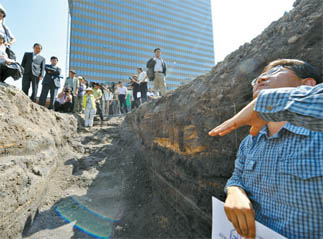 Excavators in the Sejongno area where an ancient road and Japanese olonialera streetcar tracks were excavated. [NEWSIS]

Seoul was flattened during the Korean War (1950-1953) and following the end of hostilities, the government set about establishing a solid and sustainable economy at the forefront of its agenda.

But times have changed.

On Sept. 11, the Jungwon Cultural Properties Institute reported the discovery of Igansumun, a gate which controlled the water flow from Mount Namsan to Cheonggye Stream.

The newly discovered gate is about as big as a four-story building and wide enough for a couple of buses to pass through. It was found at the site of the old Dongdaemun Stadium, which has been torn down to make way for a new design park.

Excavators at the Dongdaemun site, which was once used as a military training ground during the Joseon Dynasty (1392-1910), also dug up about 50 meters (164 feet) of the Seoul fortress wall in September.

The fortress walls protected Seoul for hundreds of years until they were pulled down a century ago. The newly discovered section used to connect Dongdaemun to Gwanghuimun, one of the eight smaller gates built along the wall.

Cho Rok-ju of the Jungwon Cultural Properties Institute mentioned that such a discovery in a sprawling metropolis such as Seoul was a groundbreaking excavation, “probably one of the biggest excavations in terms of size and historical relevance.”

The replacement for Dongdaemun Stadium is an effort by the civic officials to turn an outdated and, to be honest, seldom used stadium into the world-class Dongdaemun Design Plaza and Park.

Planners want to heighten the theme of fashion associated with the Dongdaemun area, where a huge market is located.

According to Seoul city officials, the plan is scheduled for completion in 2010. The complex will house a convention hall with seminar rooms, a lecture hall and exhibition halls.

The original plan of the design park was to replace a large portion of the stadium and build an underground cultural plaza that would connect the Dongdaemun fashion malls to the subway station and the Euljiro underground arcade.

But city planners are now waiting to see what other relics are dug up and will consider how to incorporate these finds into the original plans.

“We are putting all our efforts into further excavations to see what we can unearth. Although there are no definite changes to the Dongdaemun Design Plaza and Park plan as of yet, we are still in the process of taking the proper steps by working with various cultural organs,” said Kim Su-jeong of the Seoul City Cultural Assets Division.

Kim said that they had expected to discover some significant archeological finds prior to the discoveries at Dongdaemun. An official dig took place from Sept. 1 to 10 this year - the entire stadium had been leveled by April.

However, there could be problems ahead. Not everyone in government wants to see changes to the original plans.

“Attitudes can differ from one department of Seoul city government to the next and although nothing’s confirmed as of now, it’s going to be important to compromise and try to include aspects of our ancient history along with the new project,” Kim said. The Cultural Heritage Administration of Korea is keeping close tabs on the excavation.

It repeated what the Seoul city government had confirmed, that a meeting to decide the next step and the future possibilities of the excavations was held on Friday.

At the meeting, Lee Sung-jun of the Jungwon Cultural Properties Institute said there will be further digs. The hope is to find a further 140 meters of the fortress wall.

Cho Rok-ju of Jungwon Cultural Properties Institute’s research team mentioned that since the discovery is a major one, further excavations are needed.

A second major discovery announced Sept. 17 has also shown a change in culture among the capital’s urban planners.

A road in the Gwanghwamun area which was long assumed lost was uncovered during a dig sponsored by the government.

It was rediscovered during the initial digs to build a plaza in Sejongno, the area stretching from the Admiral Yi Sun-sin statue to Gwanghwamun in downtown Seoul.

The road is called yukjogeori and traces of streetcar tracks, which were taken apart in 1968, were also discovered.

“The yukjogeori was important for speedy communication and timely execution of orders,” said Shin Byung-ju, a history professor at Konkuk University and an expert on the Joseon period.

“It’s crucial to preserve and bring such cultural remnants from the past for everyone to see,” said Shin.

Seoul city government now has the tough task of moving forward with its initial plans for Dongdaemun and the plaza in the heart of downtown Seoul.

It must tread carefully and try to include important cultural and historical discoveries in the original plans.

Prior to the recent discoveries at the Dongdaemun and Gwanghwamun excavation sites, there was negative talk surrounding the demolition of Taepyeong Hall in the old City Hall building during construction of a new city hall building.

The demolition process has been stalled for now with the possibility of relocating and preserving Taepyeong Hall at another location. The Cultural Heritage Administration stepped in to stop the demolition by provisionally designating Seoul City Hall as a historic landmark.

The old city hall building built in 1926 was initially used as an office for Gyeongseong District and has been used as Seoul City Hall since Liberation Day in 1945.

The building exemplifies classic architecture from the Japanese colonial era and has been designated a cultural property.

Yet the Seoul city government tried to forge ahead with its new plans by starting the demolition process on the Taepyeong Hall portion of the building.

Shin disagreed with the manner in which the city went ahead with the construction of the new city hall building.

“Seoul city proceeded with their plan in haste. The old Taepyeong Hall should have been preserved through the construction of the new building,” Shin said, adding that he was saddened by the loss of the hall.

“It’s important for the city to incorporate the latest historical findings into their plans,” said Shin.