The National Assembly’s journey to find a home

The National Assembly’s journey to find a home 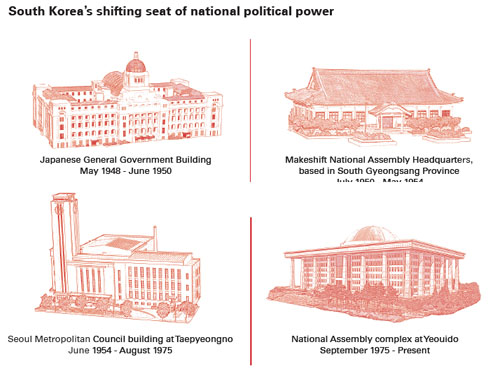 The National Assembly moved three times before settling into its current location in Yeouido in 1975.

The first National Assembly building was the old Japanese General Government Building, which was destroyed in 1995 during the Kim Young-sam administration, which sought to erase remnants of the Japanese colonial period.

The building was completed in 1926, and had served as the headquarters of the colonial government until the war ended in 1945. After liberation, the building only served for two years as the venue of the National Assembly as the Korean War erupted in 1950.

The Assembly had to be held in makeshift quarters such as the Busan Theater in Busan, as North Korean forces succeeded in the early stages of the war to push South Korean and allied forces almost into the sea.

After the war, the National Assembly moved to the Seoul Metropolitan Council building at Taepyeongno in downtown Seoul. Lawmakers gathered there for the next 21 years before the Assembly was moved to its current location.

Construction for the current National Assembly complex started in 1969 and took six years to complete.

Before moving to Yeouido there was talk of building a new venue at Mount Namsan, but the idea was scrapped when the Blue House implied that it was improper for the National Assembly “to look down” on the Blue House from a higher location.

Over this period, nine amendments have been made to the Constitutional Law.

The nation’s fist National Assembly chairman was Syngman Rhee, who also went on to become the nation’s first president. The first National Assembly elections, which took place in 1960, recorded a 95.5 percent voter turnout, reflecting the strong desire by citizens to take part in shaping the country’s future after more than three decades of Japanese colonial rule.