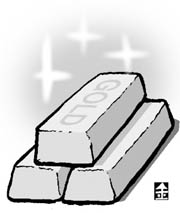 The astrophysical origin of heavy metals such as gold and platinum has long been a mystery. The situation is as follows.

Our universe was created by a huge explosion about 14 billion years ago. Ordinarily a star transforms hydrogen into helium as the result of a simple nuclear reaction, and heavier elements, like carbon, oxygen, magnesium, silicon, sulfur, nickel and iron are formed from the nuclear fusion and fission in the life cycle of stars.

Through this process, some of the stars explode as supernovas, and if the debris is scattered far and wide, it becomes material for another star. However, the energy of a supernova doesn’t play a pivotal role in fusing such heavy metals as gold or platinum.

British and Swedish researchers suggested a new solution to this question when they presented the theory of neutron star collision. Matter in neutron stars is extremely dense - a mass 1.6 times more than that of the sun. Through supercomputers, researchers calculated that two neutron stars colliding into each other will explode to form a black hole. At that time, iron and nickel absorb the neutron elements which are transformed into gold and platinum, thanks to a 1 billion degree heat and enormous density.

After the explosion, pieces are consequently scattered throughout the universe. However, such a phenomenon can occur only once every 100,000 years in the universe.

Hence, the scarcity of gold is natural. The occurrence of gold on the Earth’s crust remains just one-fifth of a billion, with a smaller amount recovered through mining. According to the World Gold Council, the total amount of gold discovered on Earth over the past 6,000 years does not exceed 125,000 tons.

Yet people remain obsessed by gold. Approximately 60 percent of the world’s total gold volume is possessed by governments and central banks.

The U.S. financial crisis has had a serious global impact. Global gold prices are sharply rising as people seek more secure assets. It reminds one of the nationwide gold collecting campaign by Koreans during the 1997 financial crisis. At that time, we sold gold worth more than $2 billion to the international market.

Today we are deeply concerned that we have no more gold left to sell. The gold created from a neutron star a long time ago found its way to Earth’s Korean Peninsula, but was subsequently carted off to a foreign country.

If we think on a universal scale, perhaps we’ll feel relieved.