A season that touches all the senses

A season that touches all the senses 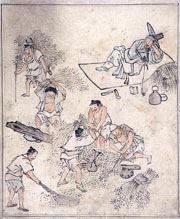 Pictures and imagery are sometimes far more effective than descriptions in capturing a moment or a sentiment. So one can only imagine that the combination of images and stirring words is even better.

Just in time for the turning of the seasons, the National Museum of Korea is organizing an exhibition that presents autumn through the eyes of renowned artists from centuries past along with poems and letters.

According to organizers, this exhibition, with cultural heritage artifacts from noted artists such as Kim Hong-do, Jeong Sun and Kang Sae-hwang, will give visitors a better sense of traditional customs and culture.

Hong Eugene of the National Museum of Korea explained the direction of the latest exhibition at the Special Exhibition Gallery.

“We tried to do without the scholarly focus on cultural relics as was the case in many of the previous exhibitions. Instead, by placing importance on a seasonal theme, we made an effort to make the contents of the exhibition easy to understand for visitors of all ages,” said Hong.

The exhibition is divided into one general and four themed sections: “Talking about Autumn,” “Longing for Autumn,” “Feel of Autumn,” “Autumn Song” and “Autumn Harvest.”

Talking about Autumn examines the significance and meaning the season has had for Koreans in the past.

Longing for Autumn looks at the virtues of the past as expressed in the autumnal landscape. This section presents plenty of mountain scenes including one of the most popular destinations at this time of year, Mount Kumgang.

Feel of Autumn includes images associated with this season, such as paintings and ceramics depicting chrysanthemums.

Autumn Song displays lyrics of folk songs, poems and letters that capture the subdued and melancholy atmosphere of the season.

The organizers promise hands-on activities including making your own paper for letters and poetry writing using traditional methods.

The National Museum of Korea is located near Ichon Station, line 4, exit No. 2.