On a sultry day in June 2000, Lt. Lee Jong-myung lost his legs in a land mine explosion near the demilitarized zone.

He purposely threw himself into the minefield to save his fellow soldier, Sul Dong-seob.

They were undergoing training exercises when Sul stepped on the land mine.

Now a colonel, Lee, 49, returned to serve in the army two years after the accident. 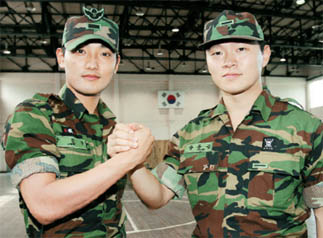 A group of soldiers rehearse for the upcoming army musical, “Mine.”

To mark Lee’s heroism and sacrifice, the Republic of Korea’s Army is staging a musical titled “Mine.”

The story is based on the true life story of Colonel Lee and the land mine accident.

The musical will also celebrate the 60th anniversary of Armed Forces Day, which falls today.

The show will star 40 soldiers who are currently doing their military service.

Among the main cast are hallyu, or Korean wave, singer and actor Ahn Chil-hyun, also known as Kangta.

The rapper Yang Dong-geun has also been drafted in.

Ahn started his mandatory military service in April and Yang in May.

Besides Ahn and Yang, 400 hopefuls auditioned in June for the other singing and acting parts.

The “actors” have been rehearsing hard at a training school in Seongnam, Gyeonggi, since early August to get themselves and the production in perfect condition for opening night.

“The soldiers who were cast in the musical have been dispatched for five months from their military unit,” said Lieutenant Choi Young-hwan, who is in charge of the musical’s production.

After the national tour ends in November, the soldiers will return to their units, according to Choi.

Mine, Korea’s first army musical, literally refers to a land mine.

But it contains a deeper meaning - the barriers and obstacles created between family members and the army.

Although the story revolves around what happened that fateful day when the young lieutenant threw himself in danger’s way to save one of his men, the musical also explores the internal conflicts that are kindled between the family members who are drawn into the saga.

In the story, Jong-myung is a patriarchal father and patriotic soldier who devotes his life to defending the nation.

Meanwhile, Jong-myung’s life values fall into conflict with his son, who dreams of becoming a dancer. Jong-myung wants him to pursue a scholastic life.

The son faces an obstacle - he is obliged to enter the army, which forces him to roam the night, feeling helpless.

The father and son become estranged until Jong-myung meets with his accident and loses his legs.

The tragic accident ties the two together as the son learns what is important in life.

“I’m most honored to act in the musical,” said Yang Dong-geun. “I hope I can bring something to the show and help develop an arts culture within military bases across the country.”

Seventy percent of the seats have been reserved for soldiers only.

“Even though the actors cast in the show are amateurs, there is a great deal of skilled acting in the production,” said director Kim Deok-nam. He also directed “Jesus Christ Superstar” and received a Korea Musical Award for Best Director in 2006.

“The musical will allow a fresh view of the dynamic Korean army,” Kim said.

“It also consoles those who are nervously counting their days until they are drafted into the forces.


The musical “Mine” will be performed from Oct. 18 to Nov. 23 in Daejeon, Seoul, Gwangju, Daegu, Busan and Chuncheon.