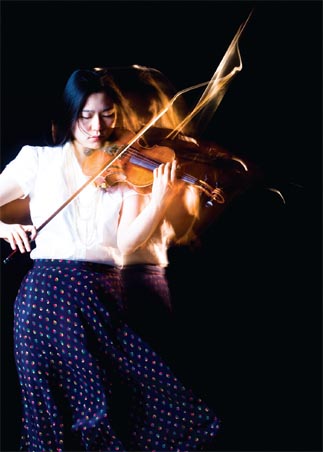 You think actress Lee Ji-ah played the violin herself in the new television drama “Beethoven Virus”? Fat chance. And those chef characters in “Le Grand Chef” that prepared sushi with incredible dexterity? Not themselves, either.

It’s a remarkable era of TV performance that we’re living in today. The same actor who was a top surgeon in one drama becomes an eccentric orchestra conductor in his next show. Another actor who was a gangster in his previous gig turns into a chef who wields a blade for wholly different reasons.

As more and more dramas deal with professionals, actors and actresses are under increasing pressure to learn the necessary skills. And more often than not, they need expert help.

The JoongAng Ilbo met with three individuals who have recently pulled off stunts in cooking, fighting and music. They told us the story of their lives behind the scenes and explained why they like to stay out of the spotlight.

The recently concluded comic book-based drama “Le Grand Chef,” which was earlier released as a feature film, is about rival cooks dueling for control over a restaurant. The show was famous for how its actors had hands-on kitchen training. For months leading up to the shoot, the actors committed themselves to the trade. Some have improved to a point where they performed most of the cooking without stunt doubles helping out.

Underline “most.” Even the well-trained actors needed help in one area: preparing blowfish dishes.

Because blowfish contains poison, only certified chefs can handle the dish. Lee Gyeong-woo, who works at the restaurant Sushi Kuni in Yeonsinnae, northwestern Seoul, first got his Le Grand Chef connection through the film. 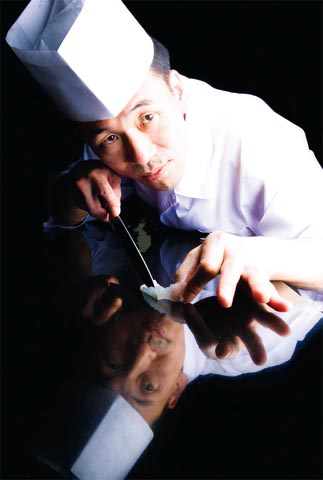 “They said they needed someone to prepare blowfish sushi,” Lee recalled. “It’s challenging because you have to deal with the poison and each piece should only be about 0.3 millimeters thin. You also need to slice pieces in specific angles.”

Lee, 43, has worked at several blowfish restaurants across Seoul and is regarded as a local authority. But he had his reservations about helping out in the film.

“I felt chefs belonged in the kitchen, not in front of the camera,” Lee said. “But I had been a fan of the original comic book series and I wanted to make at least a small contribution to the film.”

That experience led to his appearance in the drama as well. Because the TV edition is spread over 24 episodes - compared to just two hours for the film - Lee had more work to do.

But he said it was worth it. 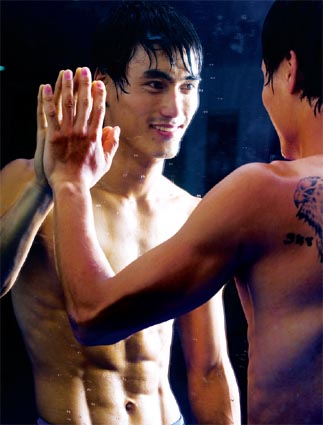 Kwon Hyuk-seok is a stunt actor who takes on physically challenging action scenes. By Kwon Hyuk-jae

“Sometimes, you can get complacent in this line of work and tend to stick with what you already know,” he said.

“And shooting for the drama made me realize my job requires a lot of creativity. And it was the new inspiration I needed after a quarter century in this field.”

Kwon Hyuk-seok is someone who needs inspiration nearly every day. The 27-year-old, after all, is a stuntman and that means he has to do the acting with just his body.

“When your character is putting his own life on the line to save someone else’s, your action has to show the desperation,” Kwon said.

“And when he is the heroic leader of the pack, your action should drip with charisma.”

Kwon, who began his stunt career in 2005, has done battle scenes for Choi Soo-jong in the historical series “Haeshin,” and for Lee Jun-ki in action-packed “Iljimae.” Both were popular dramas starring household names.

“I would watch my fight scenes on television and then at the end of a sequence, the real actor would pop up,” Kwon said. “That’s when I grow a bit upset, knowing those scenes really belong to me.”

Kwon stressed that athleticism is only part of the job requirement in his line of work.

Because it is a physically demanding job, stunt work has its moments of danger.

Kwon knows this all too well.

When shooting the historical epic “Daejoyoung,” Kwon fell off a horse that was going full speed.

His head was protected by his helmet as he crashed into a rock, and he said he had the presence of mind to scramble out of the way of a herd of horses chasing him.

“I was quite scared,” Kwon recalled. “I knew I could die if I got stomped by those horses.”

Still, Kwon says he has no complaints about what he calls “a dream job.”

“Growing up, I watched a lot of action films and I always liked the bad guys who had spectacular falls rather than the good guys who beat them up,” he said. “I want to become a true action star, someone who expresses himself through action.”

Song Won-jin expresses herself not through action, but through music. The 29-year-old violinist currently plays her instrument for Lee Ji-ah’s character in “Beethoven Virus,” a popular series about a motley crew of an orchestra. Song takes care of the character’s solos.

But she wasn’t the stuntman that the producers had in mind. Song doesn’t have Lee’s lean fingers and thus doesn’t actually appear on the screen in place of the actress. Instead, Song plays the part off camera.

She graduated from the Tchaikovsky Conservatory in Moscow and is currently teaching at Gwangju University. In 2007, Song was named “The Artist to Watch” in the classical music category by the Korean Arts Critics Association.

Even for an accomplished artist, Song said playing for a TV show isn’t nearly as simple as it seems.

“Unless the player is a veteran, it can be a tough job,” Song said. “Sometimes, they give you only two days’ notice on what they want you to play. It’s not very different to performing on stage.”

A 60-second scene that you see on TV may have taken up to five hours to record. Even if a piece only ends up being used partially, Song has to perform the entire piece. She said she never feels 100 percent satisfied.

She cites Beethoven’s Symphony No. 9 as her toughest piece to date. She played it with a male lead during the show’s second episode and it took two full days to record.

There have also been re-shoots when the movements of Lee’s fingers or the location of the bow did not match the actual music.

“Be afraid of the Internet,” Song said. “Believe me, there are people who notice.”

But Song said you can’t satisfy everyone.

“A medical doctor will always find faults watching an operation scene in a drama,” she said. “But you have to give credit to actors, too. It’s not as though they get all the time in the world to master different crafts.”

Then why would she want to play the music behind the scene and help out actors?

“I wanted the general public to get easier access to classical music,” Song said.

“I hope people can listen to my playing on television and feel a chill down their spines.”