A deceptively blah imitation of a good film

A deceptively blah imitation of a good film 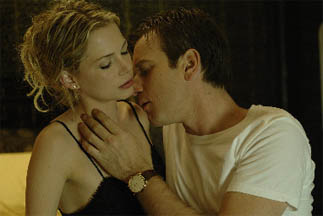 As a new member of a secretive sex club, Jonathan (Ewan McGregor, right) finds himself captivated by a woman he only knows as “S” (Michelle Williams).[MovieWeb]

Once upon a time, there was a movie about a soulless man living a monotonous existence dictated by his numerical, corporate occupation. Then a chance encounter with a handsome, renegade stranger and an apartment-razing explosion changed his entire life, leading to a secret club, confused identities and an atypical romance.

That movie, released in 1999, was “Fight Club.” And I just saw the biggest two-bit imitation of Fight Club, “Deception,” which has been released as “The Club” here in Korea. It’s as if Mars Entertainment, the local company that brought Deception here, wanted to market the film as a slightly disguised mimeograph of Fight Club.

Instead of Edward Norton, Deception has a nerded-up Ewan McGregor cast as Jonathan McQuarry, a sweet, but socially awkward, accountant. Working late one night at the law firm he’s auditing, he meets a debonair attorney, Wyatt Bose (Hugh Jackman), a step-in for Brad Pitt’s Tyler Durden.

But instead of a fight club, Deception revolves around an anonymous sex club - the rules include no names, no business talk, no rough stuff. It’s just a way “to take care of” the pent-up sexual urges of Wall Street workaholics, Wyatt tells Jonathan.

Jonathan, the type of person who has trouble comprehending the question “You don’t get much, do you?”, quickly becomes embroiled in the club, albeit shakily. After a first encounter in which he behaves like a baby giraffe taking its first steps, he asks his nameless lover why she’s in the club. She answers, “The economics of the arrangement. It’s intimacy without intricacy.”

It’s too bad that the economy of the times recently become all wrong for this movie. Although Deception would have had more relevance a year or two, or maybe even six months ago, a lot of the workaholic investment bankers on Wall Street romanticized in this film are now out of jobs. It seems in real life, these professionals are suddenly finding themselves with a lot more time for real intimacy.

The underlying problem of an anonymous sex club is, of course, that you can’t have true intimacy through sex with strangers. This becomes the dilemma for Jonathan, after a tryst with an anonymous lady, “S” (Michelle Williams), goes violently awry. After S disappears with only an ominous bloodstain in her wake, Jonathan appears a lunatic when he reports her to the police as a missing person without knowing her name, occupation or address,

What drew me to Deception was the talented, attractive cast, but it’s too bad that they’re totally wasted in this messy, incoherent film. McGregor, with his stuttering diction, overly neat hair and boxy IBM laptop, is every bit the Poindexter that Jonathan McQuarry should be, but his keen performance can’t salvage this poorly conceived role. Also disappointing is Jackman’s role as one of the producers, which makes me think he should stick to playing Wolverine and stay away from the back end of filmmaking.