Is the local festival market oversaturated?

Is the local festival market oversaturated? 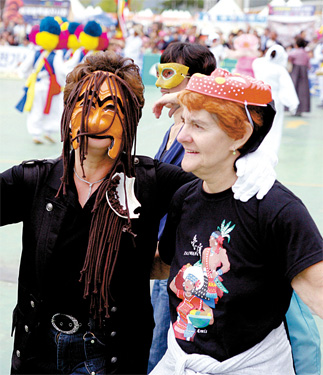 The venue for the Andong Mask Dance Festival last year.

These words were publicly addressed at the opening day of the Gaecheon Art Festival in Jinju, South Gyeongsang, in 1949.

“Just as flowers bloom where there is heaven and earth, it is nature’s provision that flowers of culture be brought to life where there is human history. ... Art is a profound part of culture that gives fragrance and a truthful bearing to the human spirit.”

The event at Gaecheon was Korea’s first official festival. It was founded to celebrate the first anniversary of the country’s establishment and to develop a more profound understanding of the arts.

“The festival’s participants recited poems facing the historic Jinju Castle,” said Choi Young-seok, the festival’s current director. Some 70,000 civilians and soldiers died defending the castle during the Japanese invasion of Korea in 1592.

“The festival was a form of composite arts like it is to this day,” the director said. The Gaecheon Art Festival, which is celebrating its 58th birthday this year, remains one of Korea’s most enduring cultural events.

Some 2.5 million visitors made their way there last year, according to Choi, many of whom also checked out the Jinju Yudeung Festival held nearby.

However, the Gaecheon Art Festival is not really the first festival to have sprung up here. Korea has a long history of celebratory events that usually involved a great deal of singing and dancing. Regardless of social status, age and gender, people from the past would gather to honor the harvest, the passing seasons, nature, weddings and births.

These traditional elements have not been lost and appear in festivals today. The tightrope performances, aerial acrobatics and musical performances seen today date back to the Joseon Dynasty (1392-1910).

“Some busy Koreans today think festivals are a waste of time,” said Kim Cheol who is in charge of festivals at the Ministry of Culture, Tourism and Sports. 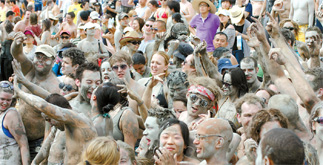 Tourists get earthy at the Bor-yeong Mud Festival last year.

“They focus on working hard to make money and these traditional festivals are neglected and set aside as unnecessary events,” Kim added.

However, even though Koreans might be less interested in tightrope walking than previous generations, the number of festivals in Korea is increasing.

There were no more than 241 festivals every year until the start of the 1990s. That number rose to 350 post-1995 after local assemblies and regional municipals were set up.

Now, there are 1,176 festivals nationwide, based on research by the Korea Culture and Tourism Institute. Gyeonggi hosts more than any other province, followed by Gangwon, South Gyeongsang and North Gyeongsang.

Kim says that the increase illustrates that Koreans are very curious, ceaselessly searching for new experiences.

The spur to set up more and more festivals has been economic. Local governments see these events as opportunities to boost tourism and revive flagging economies. 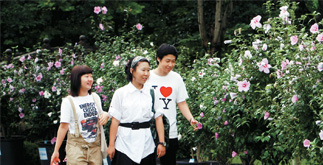 The better known festivals - the Icheon Ceramics Festival, Boryeong Mud Festival and Andong Mask Dance Festival - appear to do this job pretty well. The Icheon Ceramics Festival attracted 20,000 foreign tourists in 1987, the year the festival was founded. In 2000, the number had increased to 905,000. The Boryeong Mud Festival attracts on average some 50,000 foreign tourists, according to the Korea Culture and Tourism Institute.

And the organizers of the Andong Mask Dance Festival, currently taking place, anticipate up to 1 million tourists by the time the festival closes this Sunday.

Visitors to Andong can try their hand at a fishing contest along the Nakdong River, make traditional masks using wood, paper and ceramics and learn how to draw what are known as the Four Gracious Plants - plum blossom, orchid, chrysanthemum and bamboo - on Chinese paper.

There will also be fireworks to light up the night sky above Hahoe Folk Village in Andong. The tradition of the fireworks has an interesting history.

A group of noblemen used to gather in the evening and float paper boats on a nearby river and recite poems. After every verse, they would set fire to the fallen branches of pine trees and threw them over a cliff. As the burning branches fell to the sandy beach below, they would throw off sparks, which looked like the fireworks of today.

“Festivals are a way to hop back to the past,” said Kim from the Culture Ministry. “They inspire a sense of loyalty among local residents and encourage a sense of history.”

Kim Maeng-sun, a professor in the culture and tourism department at Sookmyung Women’s University, says festivals are a tangible attraction.

“Tourism is generally divided into five categories - attraction, facility, transportation, infrastructure and hospitality. Festivals are part of the idea of attraction.”

Festivals are a marketing strategy to target tourists during the off-peak seasons, the professor added.

But while cheery festivals attract modern-day sightseers, some say we are hitting saturation point. “We’re flooded out with festivals,” the culture and tourism professor said.

Many festival subjects overlap, he said, “which leads to lack of creativity and originality. Local governments compete against each other, which means the festivals no longer become spontaneous but mandatory. When this is the case, promoting festivals is a waste of money,” she said.

One of the problems is timing. According to the Korea Culture and Tourism Institute, 63 percent of the festivals in Korea are held in the autumn and spring. The average budget for each festival is 230 million won ($193,660).

The central government is aware of the problem and it has devised plans to construct a more discreet festival culture.

There are no legal regulations on organizing a festival, but the Culture Ministry is intensifying the evaluating system for festivals and it has decided to combine similar festivals. For example, the Posco International Fireworks Festival in Pohang, North Gyeongsang is a combination of four similar festivals of the past.

Despite the seeming oversupply, Professor Kim sees a brighter future for festivals in Korea. “I have high hopes that Korea will devise a global festival like the Edinburgh International Festival in Scotland.”