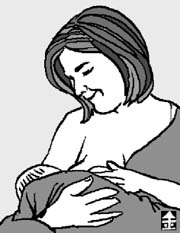 Breast-feeding is the greatest gift any mother can give her child. However, despite studies testifying to its benefits, the rate of breast-feeding among Korean women is very low - only 37.4 percent. It fell to as low as 6.5 percent in 2002, but is showing a steady increase these days.

Even though there seems to be some controversy, many research findings suggest that breast-fed infants are smarter than formula-fed infants.

Colostrum is produced in the breasts in the seventh month of pregnancy and is the first milk in the first few days after birth. It is rich in protein and antibodies. Foremilk, first drawn during breast-feeding, is reported to contain vitamin A and DHA, which affect brain cell development.

Research findings in 2005 suggested that the economic effect of breast-feeding was worth 2.2 billion Australian dollars (2 trillion Korean won) per annum in Australia.

Even though breast-feeding can be very inconvenient, it is beneficial to the mother as well. The practice of exclusive breast-feeding helps mothers lose the weight accumulated during pregnancy, by consuming about 500 kilocalories more energy on average a day. In addition, the latest results suggest that breast-feeding has added health benefits for mothers, such as lower risk of contracting ovarian and breast cancers, diabetes and rheumatoid arthritis.

Last year, scientists at Copenhagen University in Denmark discovered that a mother’s breast milk can be flavored by the foods she eats. Mothers can influence the flavor of their breast milk by simply eating a particular fruit, such as a banana, an hour or less before they breast-feed their baby. Accordingly, if a mother eats something harmful to health, it can be transferred directly to the child.

In the 1960s, the American environmental advocate Rachel Carson warned in her famous book, “Silent Spring,” that pesticide residues can be detected in women’s breast milk, causing severe damage to newborn babies. Some people point out that breast milk, packaged and sold to the public plagued by environmental pollution, should be forbidden under food safety laws in advanced countries.

But melamine is not the only concern that we should pay careful attention to.

Pollution can sicken mothers. It is evident that a mother’s illness can cause serious health problems to her baby.

Our society cannot be wholesome or have a promising future if we fail to ensure that our children are healthy and growing well, regardless of whether they are fed breast milk or powdered milk formula.


*The writer is a JoongAng Ilbo reporter who specializes in environmental issues.