When the late President Park Chung Hee held the country tight in his iron grip, even low-level field-grade officers wielded a great deal of power. It was a time when military officers easily got jobs in the public sector or as ambassadors.

Since then South Korea has become a full-fledged democracy, and the old days when an officer only had to snap his fingers to get things done are over. Human rights within the military have become a major issue and the military is scrutinized closely by civic groups and quasi government organizations.

Episodes of hazing still occur but the beatings that used to be part of routine camp life are now mostly gone. As a result, the military has had to change its discipline culture since it is no longer possible to rely on peer pressure and the invisible threat of force to get things done. 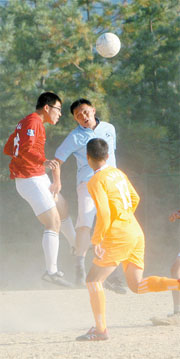 Lt. Col. Yeo Un-tae plays soccer with some of his troops. [JoongAng Ilbo]

Two days with the 90th Mechanized Infantry Battalion of the Third Tank Brigade gave reporters a glimpse into the changes underway within the services.

On a sunny afternoon, battalion commander Lt. Col. Yeo Un-tae, 43, was making his rounds on base. A Korean pop song could be heard from a pool hall in the distance. There are special hours for private second class soldiers, the lowest rank in the military. From 1 to 3 p.m. nobody but those belonging to this group has access to the hall. The measure is designed to give the recruits absolute privacy so no one ranked higher than them can take a shot in their place.

At the base’s playing field, games of football and badminton are under way. The soldiers there saluted the commanding officer when he strode by but the atmosphere was informal and not at all tense.

At night, the library inside the barracks is full of soldiers and noncommissioned officers. In the past, soldiers were not permitted in places other than their sleeping quarters, a regulation that enabled officers to keep tabs on soldiers and their whereabouts.

Some of the men in the library are studying for public sector entrance exams. Some are just reading the latest novel. Inside the barracks, posters of female movie stars hang on the walls. In the past, such decorations were strictly forbidden. No private material was allowed inside the barracks for fear that it would disrupt camp life.

In an organization where orders are given and expected to be carried out in an instant without any questioning, the creation of a small battalion newspaper by the commander has helped to establish a communication channel between officers and the rank and file.

For someone who was discharged decades ago, this new type of leadership may come as a shock, but Yeo believes it’s the right way to lead the South Korean military in the 21st century, especially when the bulk of the men are draftees.

“You have to be good to the soldiers in order to ask for quality training. Giving more freedom leads to a more proactive approach and greater efficiency,” said the officer. “Why dish out unnecessary pain? Just keeping up pressure is not very effective.”

It seems that the soft approach is paying off. In the first half of this year when the battalion awarded 19 soldiers for outstanding performance, 12 came from the 90th.

Another senior commander explained that in today’s world, where most of the soldiers have grown up as an only child or the only son and thus are often accustomed to a pampered childhood, a new approach to discipline is inevitable. “When more than 40 percent of the draftees are the only son and don’t like the idea of having to live with a bunch of guys under the same rules, we need a tailor-made approach to get each soldier combat-ready,” said the officer, adding that the spread of the Internet has made officers extremely cautious about handing out punishments.

What is also different is how soldiers follow orders. Nowadays, compared to the past, the draftees are not shy about asking a lot of questions. One wrote to Yeo arguing that running in the early morning fog is bad for one’s health. The lieutenant colonel could have dismissed the letter as a petty complaint by someone who maybe needed some heavy-duty military discipline. Instead, Yeo got the battalion’s medical officer to explain to his soldiers that the early morning runs were not exposing anyone to any health risk.

And when Seoul was engulfed in protests over the resumption of U.S. beef imports, soldiers said they wouldn’t eat beef anymore. The lieutenant colonel explained that the military was using only local beef and the tension subsided.

What a change from the old days - no soldier would ever complain or question his commanding officer in the past.

To improve lines of communication, Yeo has set up a number of channels. Soldiers can pop complaints into a collection box in the washrooms and Yeo gives his cell phone number to the lowly new private second class recruits when they first arrive to receive their assignments.

“When soldiers feel they have exhausted every official channel, I tell them to call me,” said Yeo.

Inside the military this new approach is called soft leadership. To many youngsters with no memories of the Korean War and who view North Korea more as a poor cousin who needs help, mandatory military service is often considered a mere inconvenience before entering the world of work.

Currently, the period of military service lasts 24 months for the Army with slightly different terms depending on the armed branches. The Air Force requires 27 months and the Navy enforces a 26-month commitment. Those falling short of the physical or mental fitness requirements can work at a district office or a government organization. The service term here is 26 to 36 months depending on the type of work. Qualified people that hold certain types of certificates are allowed to work at private companies while there are also conscientious objectors, such as Jehovah’s Witnesses, whose religious beliefs forbid them to take up arms. In the past five years, more than 4,000 have refused military service.

For South Korean athletes, winning an Olympic gold, silver or bronze medal or becoming a gold medalist at the Asian Games provides a free ticket out of the service.

So how to deal with soldiers who have a hard time adjusting to military life?

About 15 percent of the soldiers in his battalion fall into this category. They are divided into three groups labeled A, B and C, with A considered the most problematic cases, such as kleptomaniacs (people with a compulsion to steal), the suicidal and the mentally ill.

Nevertheless, when it comes to training the lieutenant colonel is relentless in his pursuit for excellence. Conducting the regular winter training drill that tests the unit’s readiness to cover certain distances in a given time while practicing camping skills, Yeo makes his soldiers cover 20 kilometers (12.4 miles) with full gear during daytime, and sometimes 40 kilometers at night. Similar drills were conducted in January, April and June. When there are no drills, the daily life of the soldiers returns to a more relaxed state than in the past.

For instance, Pfc. Heo In-young, 20, makes outside phone calls every day and spends up to an hour on the Internet.

How times have changed.