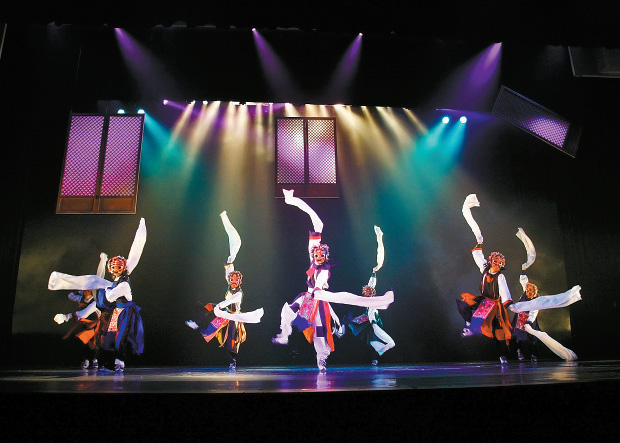 “The Confession Mask” by the Kim Choong-han Dance Company, which will be presented on Oct. 16 at the Seoul International Dance Festival.


A shamanistic dance to save the life of an oppressed modern man. A salpuri, a Korean traditional dance using a long billowing white scarf, to portray a mother’s grief for her kidnapped children. And a sword dance to criticize the intolerance that is rampant in today’s society.

These were a few of the highlights at the annual traditional dance festivities at the National Theater of Korea this summer that ran from July to August. 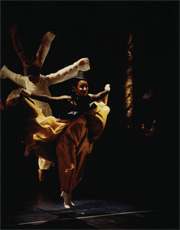 “The Eye of Heaven” produced by Changmu Arts Center.

Now in its eighth year, “Baribari Chomchom Didimsae” showcases traditional dances with newfound identities in today’s performing arts scene. The name of the festival is an onomatopoeic phrase for the small, close footsteps dancers take in their socked feet.

People think of salpuri, the monk dance or the fan dance as traditional dance and ballet, and hip-hop or disco as modern dance. But in today’s dance world those accepted boundaries are blurring. An increasing number of choreographers are merging traditional moves with contemporary ones, using folk motifs in modern performances and vice versa. 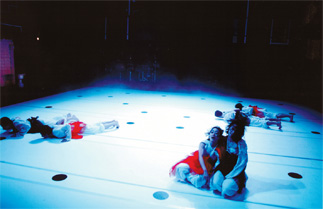 “Tale of Two Sisters” by the Lee Kyung-ok Dance Company.

“The dances of our ancestors have been given a new life,” said Choi Ji-yeon, a young choreographer at the forefront of the modernization of Korea’s traditional dance. “With the addition of contemporary elements, they can get stronger, more unique yet as universal as ever. They can not only deliver [Korean] history, but the different interpretations and values of the individual choreographer.”

Choi, the assistant artistic director at Changmu Dance Company, has been creating new pieces based on traditions pertinent to Korea.

In one recent work, “The Lost Paradise,” she modifies a gut, a shamanistic ritual, to convey an abstract, momentous theme concerning conflict, struggle and harmony in life. The piece was presented last month at the Seoul International Arts Festival, and will be featured once again at the Seoul Performing Arts Critics Forum next week.

“I had fun delving into the setting, rhythms, constructions, moves and costumes of the traditional pieces and putting parts of them into my new piece,” Choi said.

What she likes best about working with traditional dances, Choi said, is that there is such a range of choices.

“Court rituals, folk rituals, games, re-creations, you name it, the list goes on. The motifs are infinite,” Choi said. “Instead of replaying the way the dances were done in the past, redefining them in a modern way is one way to catch the attention of the rest of the world.” 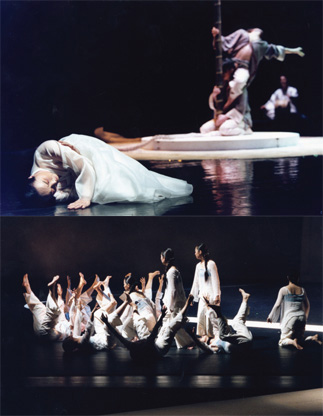 That is why veteran traditional choreographer Kim Mae-ja founded Changmu in 1976: to internationalize Korea’s traditional dances and create a sustainable and marketable legacy.

Changmu has collaborated with several dance theaters in other parts of the world. But those at the dance theater pick “Full Moon” as one of the most memorable and powerful pieces.

It is a collaboration between Kim and Carolyn Carlson, a leading figure in French contemporary dance and the artistic director of the Centre Choregraphique at Roubaix, northern France, in celebration of the 120th anniversary of Franco-Korean relations.

With its structural basis on ganggangsuwollae, a Korean traditional circle dance performed under the full moon to celebrate the Korean Thanksgiving, Chuseok, Full Moon received critical acclaim in both countries. It was also performed at the Cool New York Festival, in New York, earlier this year, getting favorable reviews.

“The best feature of our traditional dance is that it’s natural, spontaneous and doesn’t strain you body,” Kim Mae-ja told the JoongAng Daily in a phone interview from Beijing Dance Academy, where she was teaching traditional Korean dance. “The lines and the movements come in smooth curves, circles like those that can be found in nature. When you put your arms up, or open your hands, you rarely do them in a straight, rigid manner.”

Kim says she strongly objects to the idea that traditional dance cannot be categorized as modern dance.

“Korean dances are not confined by anything,” Kim said. “They can be performed to any kind of music. They don’t need a huge stage, either. In fact, they are best experienced in humble settings, close to the audience. So Korean dance is more modern than you might expect.”

A gut feeling for the ghosts of dances past


Opening up this year’s Seoul International Dance Festival (SIDance) this Friday will be Cheoyong Gut, a shamanistic ceremony. The annual international festival is now in its 11th run, but this is the first time it will open with traditional forms of Korean dance.

“People today just look for things that are new and modern. In doing so, we forget how good the things are that we already have,” said Lee Jong-ho, artistic director of SIDance, in a recent press conference. “This year, our aim is to enhance the cultural exchange function of our festival.”

Cheoyong Gut is directed by Jin Ok-seop, a well-known stage director and an author specializing in traditional Korean performances. Jin directed the dance scenes of the successful 2005 epic, “The King and the Clown.”

“The thing about our traditional dances is that they have already been verified through history,” said Jin. “There are just so much you can take from them - gisaeng (female entertainers from the Joseon Dynasty), street circuses and more.”

Also in a program named “Korean Identity through Dance 13” on Oct. 16, choreographers Kim Yoon-soo, Kim Choong-han and Yoon Su-mi will showcase fusion pieces with a seamless mix of the old and the new, Korean and international.

“As we’ve seen in recent B-Boy performances, the wall between what’s ours and what’s foreign is falling,” said Yoon of Changmu Dance Company.

There is also a piece whose presentation is modern but whose inspiration can be traced back to a very Korean culture - the culture of gisaeng.

“Gisaeng Becomes You” is a collaboration between Korean choreographer Kim Yoon-jin and American director Dean Moss. The idea for the project came when Moss found a book of poetry by Korean courtesan-artists in a library in the United States.

“My connection to the culture was pretty random,” said Moss. “But I felt that the lives of gisaeng and our lives as similar - how they were trained to entertain the aristocracy, which I felt is similar to contemporary artists’ life.”

The organizers of SIDance say traditional elements are an indispensable part of the festival, and that they plan to further modernize traditional Korean dance.