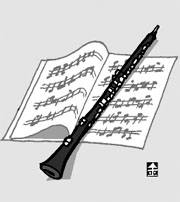 Recognized internationally as one of the finest musical groups of its kind in the world, the Orpheus Chamber Orchestra is unique for having no conductor. For every work, the orchestra members select the concertmaster and the principal players for each section. With its collaborative leadership style, the talented musicians create profound, conductor-less harmonies.

American-style market-based capitalism is also widely regarded to focus on a similar type of control.

A key task for orchestra members is the fine-tuning of their instruments to avoid any dissonant sounds. In this sense, the oboe plays a pivotal role in harmonizing different sources of sound.

The oboe was once banished by the medieval church on charges of “depriving the audience of its soul.” Its beautiful yet pathetic tones were in discord with divinity. The oboe requires patience; it requires a sustained output of breath in order to deliver its sad, sweet melodies. However, the oboe has endured because of its stable tones. A symphony orchestra is tuned according to the oboe before performances. Violins and cellos tighten or loosen their strings in tune with the oboe.

Orchestras take precautions against the unique sounds of the oboe. A slight mistake may lead to discord. That’s why it is considered the most dangerous musical instrument, one that does not allow any mistakes, even though it serves to harmonize the whole orchestra.

The recent American financial turmoil reminds me of the oboe. America has been at the heart of the global economy for the past 60 years. We have also unhesitatingly accepted American economic ideas such as big market, small government and that liabilities also can be assets.

Like the Orpheus Chamber Orchestra, the global economy had played smoothly without a conductor. But now the oboe is causing trouble as the U.S. financial market splutters out a variety of discordant tones. At such times, a skillful orchestra takes emergency measures. While the oboe reed is being trimmed, the English horn fills the void with the support of other instruments to harmonize the sound.

The U.S. is pouring billions into a rescue package to fix the broken oboe. China is playing the role of English horn by purchasing $200 billion worth of U.S. Treasury bonds. If such mutual assistance continues, it will save us from being confronted with a catastrophe, which should make us feel calm and relaxed. If the performance fails, however, our businesses will go broke, which will truly be a nightmare for us all.