Ueno Juri, second from left, and her manga assistants from “Goo Goo the Cat.” All photos provided by PIFF

BUSAN - It took less than a minute for Inudou Isshin’s latest film, “Goo Goo the Cat,” to enthrall moviegoers at the 13th Pusan International Film Festival.

All 250 seats for its premiere last Friday morning at the Primus Cinema in Haeundae, sold out fast.

Japanese director Inudou, whose past films include “Josee, the Tiger and the Fish” (2003) and “La Maison de Himiko” (2005), was surprised by the film’s popularity.

“I have an image that Koreans like provocative and sensational films,” Inudou said, during a press conference last Saturday at the Sky Hall in the Grand Hotel. 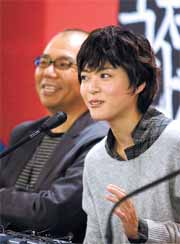 The Pusan International Film Festival, one of the largest in Asia, kicked off last Thursday and has its closing ceremony this Friday.

“I’m very curious about the film’s reviews in Korea,” the 48-year-old said, “especially because the story of Goo Goo the Cat is calm and quiet.”

The film is based on Yumiko Oshima’s manga of the same name and revolves around a middle-aged cartoonist Asako (Kyoko Koizumi) and her assistant, Naomi (Ueno Juri).

Asako is depressed when she loses her beloved cat Saba and develops writer’s block. Naomi and two other assistants are worried that it will affect her career.

Then one day, Asako comes across a three-month-old cat at a pet shop and names her Goo Goo.

Though the cartoonist regains her vitality, she faces another life’s challenge - she is diagnosed with a serious illness.

“The story’s original writer, Oshima, is also suffering from ovarian cancer,” Inudou explained. She also has a cat and lives in Kichijoji, a small town in Musashino, Japan.

“Kichijoji has two things going for it,” he said.

“One part of the city is very modern with department stores and high-end restaurants. The other is full of nature - railroad tracks and parks.”

Forests in Japan are considered spiritual places. It’s where the Japanese people communicate with nature, Inudou explained, saying he wanted to reveal the ordinary qualities of life in Japan, like the cycle of nature, through his movies.

“It’s one way to differentiate Japanese films from Hollywood blockbusters,” he said, noting the advantages of having a low budget.

As if to reflect Inudou’s values of moderation, Ueno was dressed unpretentiously at the press conference.

She expressed an interest in starring in a Korean film with Korean actors.

Meanwhile, “filming with a cat involved great patience,” said Ueno, pointing out that it took almost four hours to shoot a two-second scene with the feline actor.

To adjust to the environment, both Inudou and Ueno tried looking after a cat before starting the film’s shoot.

And they still do.

Goo Goo the Cat will be released next Thursday in Korea.