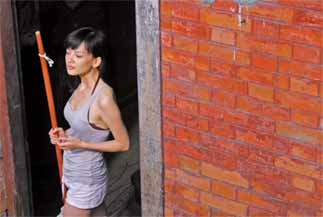 “When I asked Zhang to participate in the first Busan festival in 1996, he came right over from Paris without hesitation,” said Lee Yong-kwan, this year’s festival director.

After Zhang’s “Behind the Forbidden City” (1996) was screened at Busan, it was sold to 60 film markets around the world.

This year Zhang visited Korea’s port city with his new tragic-love story film, “Dada’s Dance.” It is one of the festival’s 85 world premieres.

The story revolves around Dada (Li Xinyun), a young dancer living in a small village in China. One day, she is told by her supposed mother’s boyfriend that she has a different birth mother, which leaves her engulfed in a complex identity crisis.

The film created a buzz in film circles after it was released in China last month. Critics said the movie touched upon a sensitive issue - sexual violence in the family.

The film director was unrepentant.

“You shouldn’t judge the film to the extreme,” Zhang said during a gala presentation last Friday evening.

“The film focuses on other aspects of life including growth, hope and desire.”

Li, who was also at the presentation, backed up her director.

“The story depicts only the tip of the iceberg.”

“The Chinese film industry has no choice but to open its doors to survive,” he said.

The last screening of “Dada’s Dance” is today at 1:30 p.m. at Busan Cinema in Nampo-dong.