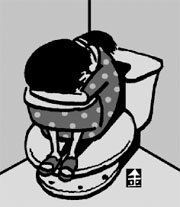 Is it possible for psychologists to accurately diagnose psychological disorders? In 1970, an unknown American psychologist conducted an experiment to test this.

David Rosenhan and seven of his friends went to psychiatric hospitals all over the United States and falsely declared, “I hear voices and thudding sounds.”

By just stating this symptom, they were all hospitalized in psychiatric hospitals. But upon being hospitalized, they acted just like normal people, expressing their satisfaction and dissatisfaction with daily life to their doctors.

By the end of the experiment, seven had been diagnosed with schizophrenia and one with bipolar disorder. After an average of 19 days, they were released from the hospitals on grounds that they had temporarily recovered upon treatment.

Based on the experiment, Rosenhan published the paper, “On Being Sane in Insane Places.” In reaction to the negative publicity, one psychiatric hospital challenged Rosenhan to send more pseudo-patients over the next three months, claiming “We will find them.” Three months later, the hospital proudly declared that they had found 41 such patients. In reality, not a single pseudo-patient had been sent.

Psychology, especially psychoanalysis, struggled to recover from this blow. Back then, it was the last straw when psychology mainly consisted of psychoanalysis and talking cures such as, “The past can cure you. Tell me all your repressed wounds from childhood, and then cry to your heart’s content.”

But perhaps this style of treatment could make a comeback. The Internet edition of the New York Times on Oct. 1 carried the story “Psychoanalytic Therapy Wins Backing.”

According to the article, “Intensive psychoanalytic therapy, the ‘talking cure’ rooted in the ideas of Freud, has all but disappeared in the age of drug treatment and managed care. But now researchers are reporting that the therapy can be effective against some chronic mental problems, including anxiety and borderline personality disorder.”

The study, based on more than 1,000 patients, was published in the Journal of the American Medical Association on Friday.

It is particularly welcome to read of effective depression treatments, as more than 2.5 percent of South Koreans suffer from depressive disorders according to data disclosed Monday.

The return of psychoanalytic therapy must be proof that it has developed more effective methods after Rosenhan’s attack. Just like civilization, doesn’t science develop by taking up challenges?