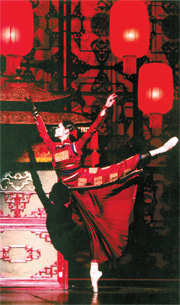 Dancers from the National Ballet of China will show off their graceful ballet moves. Provided by the Goyang Cultural Foundation

T here are several important “firsts” in the upcoming ballet production “Raise the Red Lantern.” For starters, it’s the long-awaited Korean premiere. Since its debut in 2001, the ballet version of Zhang Yimou’s award-winning film of the same name has received critical acclaim in the United States, United Kingdom and France and elsewhere. There have been talks of a possible Korea production since 2004.

Raise the Red Lantern is also the first time the internationally acclaimed filmmaker Zhang Yimou has tried his hand at directing a ballet.

In 1997, Zhang and the conductor Zubin Mehta created a new production of the opera “Turandot,” which was staged in Italy, China and Korea.

As can be expected from Zhang’s other productions, including the recent super-scale, extravagant opening and closing ceremonies of the Beijing Olympics, the stage will be adorned with his trademark sumptuous visuals and colors. 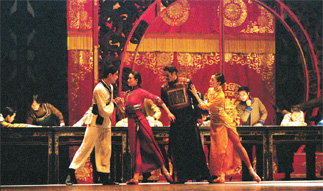 “Raise the Red Lantern,” will be staged in Korea for the first time this month.

“I personally attach great importance to colors and their compatibility, and the same goes for this particular dance drama,” Zhang said in a recent interview with the Korean press. “For instance, there is a scene where blood is splashed onto white walls near the end of the show. This is to convey death. I think this is a strong mix of colors. It’s my personal taste.”

The performance will also be the first time the National Ballet of China, one of the world’s most prestigious dance troupes, performs here.

Founded in 1959, it is known for its iron-clad, almost acrobatic, techniques, as well as its unique combination of Western and Chinese aesthetics and values.

“It can be said that Raise the Red Lantern is one-plus-one creative work. In other words, I added Chinese cultural elements to Western ballet. Personally, I am very interested in this kind of process. It’s that “you in me, me in you” kind of work. It also falls in line with the world trend of pluralism,” Zhang said.

Like in the film, the ballet tells the story of a young girl who becomes the third concubine of an old, wealthy man in early 20th century China. The jealousy, conflict and tragedy reveal the dark side of the feudalism prevalent at that time.

“I think Korean audiences will be able to see a lot of Asian cultural elements in this work as we share common Oriental roots,” Zhang said.