The parlous state of the movie industry

The parlous state of the movie industry 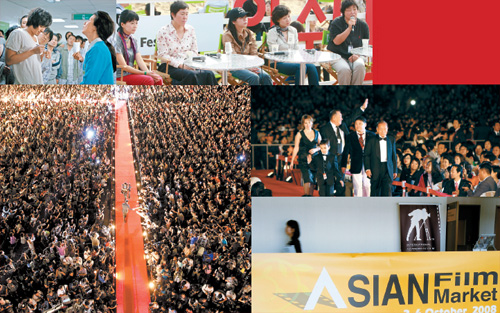 Clockwise from top left: “I Am Happy,” the closing film by Yoon Jong-chan; five Korean female directors including Yim Sun-rye, far right, during an open talk near the festival’s beachfront; festival director Kim Dong-ho, far right, and Kazakh director Rustem Abdrashev of the opening film, “The Gift to Stalin,” second from right, walk down the red carpet at the opening ceremony last Thursday; sights of the Asian Film Market from the Sea Cloud Hotel; and scenes from the opening night of the festival.Provided by PIFF


BUSAN - Dark clouds overshadowed the opening of this year’s Pusan International Film Festival. The suicide of one of Korea’s most beloved actresses, a perceived crisis in the nation’s once booming film industry and tensions in the global economy were a distraction that muted the festivities. 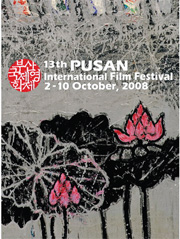 When news broke on Day 1 of the festival that the actress Choi Jin-sil had tragically killed herself and rumors circulated as to the cause and the circumstances, several reporters and celebrities canceled their trips at the last minute or returned to Seoul shortly after the festival opened. The sense of loss and despondency in the southern port city was palpable.

A visit to the Asian Film Market, which took place during the festival, seemed to sum up the mood. Last year, 460 film production companies came to Busan - “Busan” was formerly “Pusan” and the film festival retains the old spelling - but this year there were 132. It’s no surprise that fewer distribution deals were struck.

The prevailing atmosphere was apt, capturing the sense of crisis that is engulfing the local film industry. The suffering has been caused by overproduction, heightened by the hype of hallyu, or Korean wave, and wider access to illegal software, allowing viewers to download movies for free, have rattled the industry. Shocked but perhaps not surprised was the response of many to information released by the Korean Film Council recently that Koreans download an average of 54 movies a year from file-sharing sites.

Throughout the festival, one of the hottest topics of conversation was the government’s lax attitude to licensing rights in new media services. Some experts have even suggested that the government is strategically letting unauthorized software exist on the Internet and on mobile services to nurture Korea’s IT industry.

Other experts saw the problem as a crisis of talent, or lack thereof. “Investment has been too hasty in the past and that has caused problems,” said Kim Jin-hae, a film professor at Kyungsung University, who facilitated a talk last Sunday on the state of the domestic film industry. “But I think the problem now is a lack of creativity.”

On top of this, the country’s distribution system and a lack of grants for art house or low-budget films have bankrupted producers of smaller films.

“It’s too bad that the Korean government has no systematic support for art house films in tough times like this,” said Lee Mi-jeong, who works for the distributor Cine-Asie, based in Montreal, Canada. “Korea has to constantly search for new talent to keep the industry alive, like they did with filmmakers such as Kim Ki-duk and Hong Sang-soo, once considered underground artists. Otherwise, there is no way for art house films to survive.”

So urgent was the sense that something had to be done to revive the flagging industry, members of the Korean Film Council and local film industry brainstormed ways to revitalize the sector at an informal talk on the train down to Busan last Thursday. Everyone is spooked by the fall in box office revenue and the sharp reduction in the number of productions, down from 112 in 2007 to 50 so far this year.

So as the train sped south to Busan, Han Sang-jun, the director of the Puchon International Fantastic Film Festival, pointed out that while the theme of PiFan this year was horror, only one local horror flick, “Death Bell,” was screened.

Kang Han-sub, the chairman of the Korean Film Council, joined in the chorus of gloom, referring to “the industry’s critical state of panic.”

But not everyone is painting such a frantic situation. On the brighter side, experts agreed that despite the overall shortage of Korean films, the quality is better than ever.

“The industry is not in a state of panic,” said Cha Seung-jae, the president of the Korean Film Producers Association during the Sunday conference. “It may be slipping into a coma but it’s not dead yet.”

Despite the dangers of losing consciousness, there were signs of hope during the festival, which closes Oct. 10. One noticeable innovation was an open call for young producers to pitch screenplays to a jury made up of veteran industry insiders, a project initiated by an association of filmmakers called Korea Producers in Focus.

The aim was to strengthen the creative role of producers and get rid of old practices such as the need for a “star name” to get a film financed.

The winning candidates were given a rare chance to request one-on-one interviews with guests and buyers at Pusan Promotion Plan, a pre-market sale connecting directors and producers with potential investors. Five works were chosen including “Very Lovely” by Sin Chang-hwan and “Fly June” by Sun Kyung-hee.

“The winners will face a better chance to work with major investors as they gained some credibility through this [award],” said a male staff member at the Korea Producers Guild of Korea.

There was more good news. At the Asian Film Market. Miro Vision sold the remake rights of “Driving with My Wife’s Lover,” a Korean film by Kim Tae-sik to Circle of Confusion, a production company in Los Angeles.

CJ Entertainment sold the rights of “The Good, the Bad, the Weird” to NonStop, a distributor for Scandinavian regions along with a TV and video package to other areas. In total, deals for 38 Korean films were signed, according to an official wrap-up report released Monday.

Drama behind the scenes at the Pusan International Film Festival

The festival got off to a depressing start with the suicide of Choi Jin-sil, but that wasn’t the only moment of high drama. A comedy by Hong Kong director Hark Tsui called “All About Women” was pulled out of the festival’s gala presentation because the Chinese Film Bureau reportedly didn’t approve the film’s international release.

The local media paid keen attention to Anna Karina, a Danish-French actress who starred in several of Jean-Luc Godard’s New Wave classics. Visiting the festival for the first time, Karina headed the jury for the New Currents competition along with Indian director Santosh Sivan, actress Lee Hwa-si and German producer Karl Baumgartner. The competition, the only one at the festival, is aimed at young Asian filmmakers and offers two prizes worth $30,000 from a field of 14 productions.

There was also a tribute to the late director Han Hyung-mo (1917-1999) for whom the festival dedicated a full retrospective. “Han was a pioneer of Korean cinema [in the 1950s and 1960s],” said his long-time friend and director, Park Seung-bae. “He diversified Korean film genres, introducing thrillers and music films and different kinds of moving shots and camera techniques.”

Interestingly, six of the 20 films invited to Busan were directed by women, and women’s stories were strongly emphasized in features such as “Sisters on the Road,” “Sunny” and “Forever the Moment,” a story based on the women’s handball team at the 2004 Olympics in Athens. The handball movie was the first film about women by Yim Sun-rye, whose previous movies have focused more on the portrayal of masculinity.

“In the flow of Korean cinema, this [the emergence of many women directors] is an extremely rare incident,” said Lee Sang-yong, one of the organizers, at an open debate for female directors and the public on Haeundae Beach during the festival.

The sentiment is shared by film professionals outside Korea. Riccardo Gelli, the director of the Korea Film Festival in Italy, plans to program a special section for female Korean directors next year.

“The ending of ‘Forever the Moment’ is stunningly moving even though the national handball team does not win the finals,” Gelli said.

The last film of the festival is “I Am Happy” by Yoon Jong-chan of “Blue Swallow” fame, based on the story of a nurse and a patient at a psychiatric hospital who find a home inside the ward.

Despite the problems this year, the organizers haven’t lost sight of the aims of a film festival. On Saturday night at Busan Yachting Center, a screening of the “The Sky Crawler” was suddenly stopped halfway due to problems with the projector.

But veteran festival director Kim Dong-ho showed up on stage after the screening to apologize.

It was a nice touch because, above all, the festival is about watching good movies and Kim showed he cared.