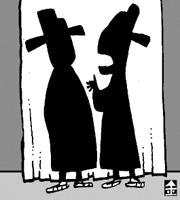 Sun Tzu, acknowledged as one of the greatest authorities on military strategy, wrote about five methods of using spies.

The first is to use ordinary people from the enemy’s camp as spies. They are called “local spies” who gain information by building relations with common people.

Bribing your enemy’s officials is also a common method of spying. Using these people, known as “internal spies,” who work in public offices where important information flows, can be very effective.

Another ploy is to use your enemy’s spies as your own. These “double agents” are famous for their role in the “Romance of the Three Kingdoms.”

The fourth scheme is the dissemination of false information into the enemy’s camp. The misinformation is designed to lead your foes to ultimately make wrong decisions.

Lastly, spies sent into the enemy’s camp to make them root around for information and report back are “surviving spies.”

If we read Sun Tzu’s arguments, the history of spies must be quite old.

In Korean, spies are called gancheop. The syllable “gan” usually means “in between.” But when used as a verb, it also means “to alienate others.”

It is the act of implanting discord among the enemy so that in the end, they fall apart and harbor hostility among each other. Therefore, a spy’s ultimate goal is to alienate and destroy the enemy.

We still vividly remember our shock on learning that 34 percent of applicants to the Korea Military Academy responded in a survey, “The United States,” to the question, “Who is South Korea’s main enemy?”

Such beliefs would be enough to put the country’s legitimacy in dire risk.

We should take the opportunity to seriously ponder who is alienating the society of the Republic of Korea.