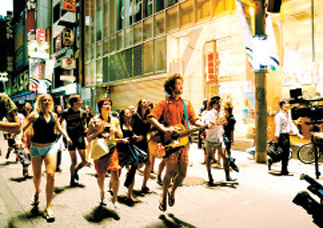 Singer-songwriter Old Man River is coming to Korea. Provided by the organizer

In more ways than one, the Australian singer-songwriter Old Man River is different from other rising musicians today.

As friendly as the lyrics from his song “La” sound, his album “Good Morning,” released in March last year, may puzzle those who don’t know who he is, as it doesn’t contain an introduction of the artist.

The background of Ohad Rein, the real name of the artist, is as unique as his music.

He was born in Australia and grew up in Israel and other parts of the world. He even served for three years in the Israeli army, which was compulsory.

His stage name, Old Man River, is in a way what he aspires to be in his career.

Just like the Mississippi River in the United States, which is nicknamed Old Man River, the free-spirited, natural folk singer seeks to be someone who constantly flows and moves forward no matter what.

Listening to Good Morning is like opening a mixed bag of tunes and influences, perhaps because Old Man River has been around the world.

He’s travelled from the United States to India, singing in the streets and the subways of New York and learning to play the sitar in India.

“Traveling is the best school in life,” he is quoted as saying.

He had a week-long promotional tour in Japan in February and performed at the Summersonic Festival in August.

This weekend, Old Man River will appear at the Grand Mint Festival at Olympic Park on Sunday. The festival, now in its second year, has a picnic-like atmosphere full of easy music. While you may not know Old Man River, you will recognize “La,” as it was used in a popular laptop commercial.