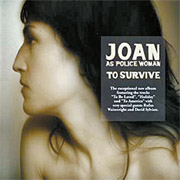 Joan As Police Woman’s music is slow. The notes on her second album, “To Survive,” never get excited. Instead, the tension that keeps me listening is created by Joan Wasser’s voice and the way the instruments are arranged.

Before she went solo, Joan Wasser was a part of The Damnbuilders and Anthony and the Johnson’s. So I was expecting her music to have more influences from them that it actually does.

Joan’s music is honest, experimental and not afraid of mixing classical and jazz influences in with rock. In the track “To Be Lonely,” the piano is like a Chopin sonata, but the next track, “Magpies,” makes you feel like you’re in a jazz club.

The music shifts between happiness and sadness through her poetic lyrics and the way the instruments are played. But it never loses its slow pace.

This is music to fill your apartment with when it is dark outside, or listen to in headphones while just closing your eyes and taking it slow. By Ida Grandas