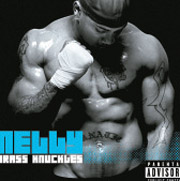 It must be getting hot in herre because Nelly has taken off his clothes for the cover of his fifth album. And it seems his four-year hiatus has been spent in the gym, looking as buff as LL Cool J - who just happens to make a guest appearance on the album.

In all, 16 big names feature on “Brass Knuckles” - all playing up to their stereotypes - making us wonder whose album this is. But for so much star power, nothing truly notable happens. Snoop Dogg exhales long enough to represent the West Coast, Usher chimes in to remind us that he’s popular with the ladies on the aptly titled “Long Night” and drug-kingpin Rick Ross helps Nelly act as tough as his album cover.

Nelly does manage to rise above the mediocrity when Chuck Dee helps him get political with the Iraq War diatribe “Self-Esteem,” complete with its ’70s-funk style, and the club-friendly “Party People” featuring Fergie, isn’t terrible.

But for all Nelly’s fruity flavors of musical Kool-Aid here, you probably won’t quench your thirst. By Cam Graham