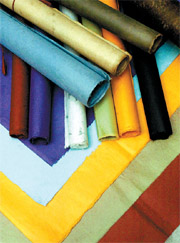 Hanji, traditional Korean paper, once had an astounding variety of uses in daily life. It was used by writers and painters in their work, and in homes on screens, doors and as floor covering.

In more recent times, however, it was confined to conventional items - fans, lamp shades, jewelry boxes - staples created for tourist dollars in places such as Insa-dong in northern Seoul.

Hanji has resurfaced in various forms with the potential to be used in a great number of ways again.

Versatile and durable, Korean traditional paper is now being used to develop new and interesting products.

Hanji is praised above all else for its durability, but it also has the potential to be manufactured into environmentally friendly products, according to Cha Woo-soo of the Hanji Paper Association. 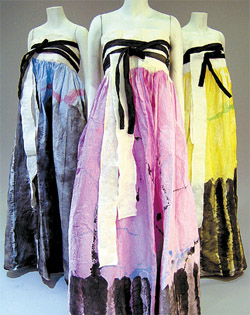 Dresses made from hanji. Provided by the Hanji Development Institute

He claims hanji has been proven to last 1,000 years.

According to the Hanji Development Institute, the International Organization for Standardization certified the strength and longevity of hanji in October 2002.

Hanji gets its durability from its unique manufacturing process. Mulberry branches are stripped of their bark in late autumn. The bark is boiled and later cooled in cold water. Then it is pounded repeatedly and laid out to dry.

In an effort to make good use of hanji’s durability and strength, Cha has developed a replacement for a common modern item, plastic cards.

According to Cha, cards made from many layers of hanji are almost identical to their plastic counterparts in terms of how they can withstand wear and tear. 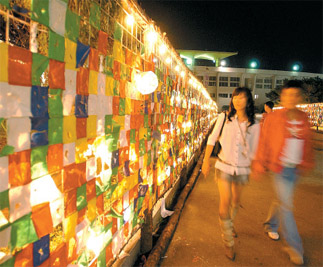 “It is typical for someone to carry anywhere from five to 10 plastic cards for various purposes. We have developed hanji cards which we hope can replace plastic cards in the future. I think this can be a first step towards using hanji products to protect the environment,” said Cha.

That’s not all. Yang Gil-seob, an inventor, has built audio speakers with hanji components. The speakers were invented four years ago and have been steadily developed through the years with Cha’s help.

Cha claims the speakers are comparable in sound quality to ones currently in the market.

The Hanji Paper Association is leading the way in exploring the use hanji to develop interesting products. The Hanji Development Institute has over the past few years been promoting clothes made from hanji.

According to Kim Jin-hye, director of the annual Wonju Hanji Festival held every September, an exhibition of wedding dresses made from hanji cloth are currently on display through Oct. 28 to commemorate the tenth anniversary of the festival.

Dresses made from hanji have, for the past few years, been gracing local catwalks. To make hanji cloth, ten pieces of hanji are soaked in water, stacked and then chemically softened.

Color is then added using natural dyes and sealed with corn starch.

“We have been using hanji cloth lately in our designs,” said Kim. “The idea was developed in 2004. We use thinly cut hanji paper which is woven into threads to be used to make clothes. 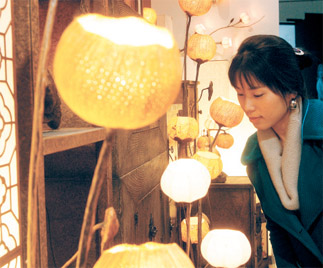 A lamp made from hanji. [JoongAng Ilbo]

“These environmentally friendly clothes are great in that they help to preserve a part of Korean heritage. They are also well suited to the new environmentally conscious society,” said Kim.

Other than clothes, the most common items made from hanji are fans, lamp shades and post cards. Although it’s hard to estimate exact figures, Kim is certain that the use of hanji, as well as awareness of it, has risen over the past decade.

“An increasing number of schools and artists now prefer to use hanji,” added Kim.

Despite the increased interest in hanji over the past few years, Cha explained there are several shortcomings in his effort to further develop hanji products and market them effectively.

The first problem is the scarcity of the mulberry trees necessary to produce hanji. He has found a solution to this problem by reaching an agreement with North Korea to use its mulberry trees and to plant more in certain areas for future use.

The second issue is funding. Kim has yet to solve this problem. He has not received any interest or support from the government or cultural organizations to aid his efforts.

“There are many more useful environmentally safe and durable hanji products which can be developed but funding is of serious concern.

“We not only lack the funding to conduct proper research and development but have not received any support from the government despite several attempts at getting it.”